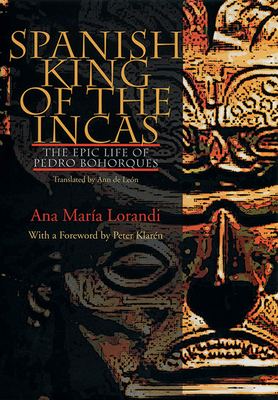 Spanish King Of The Incas

Described in his lifetime as “mad,” “a dreamer,” “quixotic,” and “a lunatic,” Pedro Bohorques is one of the most fascinating personalities of Spanish colonial America. A common man from an ordinary Andalusian family, he sought his fortune in the new world as a Renaissance adventurer.

Smitten with the idea of the mythical cities of gold, Bohorques led a series of expeditions into the jungles of Peru searching for the paradise of El Dorado. Having mastered the Quechua language of the countryside, he presented himself as a descendent of Inca royalty and quickly rose to power as a king among the Calchaquíes of Tucumán. He was later arrested and executed by the crown for his participation in a peasant revolt against Spanish rule.

In Spanish King of the Incas, Ana María Lorandi examines Bohorques as a character whose vision, triumphs, and struggles are a reflection of his seventeenth-century colonial world. In this thoroughly engaging ethnohistory, Lorandi brings to light the many political and cultural forces of the time. The status of the Inca high nobility changed dramatically after the Spanish conquest, as native populations were subjugated by the ruling class. Utopian ideals of new cities of riches such as El Dorado prevailed in the public imagination alongside a desire to restore an idealized historic past. As the Middle Ages gave way to the new belief systems of the Renaissance, ingenuousness about mythical creatures became strong, and personal success was measured by the performance of heroic deeds and the attainment of kingdoms. Charismatic and bold, Pedro Bohorques flourished in the ambiguous margins of this society full of transition and conflict.

Ann de León's artful translation preserves both the colorful details of the story and the clarity of expression in Lorandi's complex analyses.


Praise For Spanish King Of The Incas: The Epic Life Of Pedro Bohorques (Pitt Illuminations)…

”With meticulous research and skillful writing, Lorandi communicates a passion for her material that will be felt by her readers. Ana de Leon’s exemplary translation . . . makes Lorandi’s scholarship on Bohorques available to an English speaking audience.”
--The Americas

"This masterful book requires careful reading but offers profound insights into the ethnic and social tensions of the colonial Andes."
--American Historical Review

Praise for the Spanish edition:
"The implausible exploits of Pedro Bohorques make up a fascinating tale. . . . It is a story conveying the strangeness of the colonial Latin American past while also awakening a vivid, immediate sense for it."
--Hispanic American Historical Review