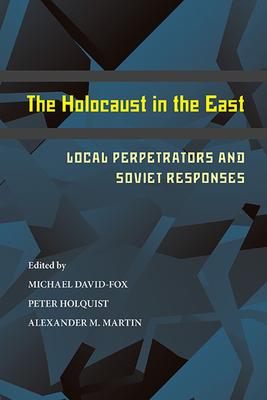 The Holocaust in the East

Silence has many causes: shame, embarrassment, ignorance, a desire to protect. The silence that has surrounded the atrocities committed against the Jewish population of Eastern Europe and the Soviet Union during World War II is particularly remarkable given the scholarly and popular interest in the war. It, too, has many causes—of which antisemitism, the most striking, is only one. When, on July 10, 1941, in the wake of the German invasion of the Soviet Union, local residents enflamed by Nazi propaganda murdered the entire Jewish population of Jedwabne, Poland, the ferocity of the attack horrified their fellow Poles. The denial of Polish involvement in the massacre lasted for decades.

Since its founding, the journal Kritika: Explorations in Russian and Eurasian History has led the way in exploring the East European and Soviet experience of the Holocaust. This volume combines revised articles from the journal and previously unpublished pieces to highlight the complex interactions of prejudice, power, and publicity. It offers a probing examination of the complicity of local populations in the mass murder of Jews perpetrated in areas such as Poland, Ukraine, Bessarabia, and northern Bukovina and analyzes Soviet responses to the Holocaust.

Based on Soviet commission reports, news media, and other archives, the contributors examine the factors that led certain local residents to participate in the extermination of their Jewish neighbors; the interaction of Nazi occupation regimes with various sectors of the local population; the ambiguities of Soviet press coverage, which at times reported and at times suppressed information about persecution specifically directed at the Jews; the extraordinary Soviet efforts to document and prosecute Nazi crimes and the way in which the Soviet state’s agenda informed that effort; and the lingering effects of silence about the true impact of the Holocaust on public memory and state responses.

Praise For The Holocaust in the East: Local Perpetrators and Soviet Responses (Russian and East European Studies)…

"The essays are excellently researched empirical investigations into the Holocaust in the former Soviet Union, specifically from the point of view of local perpetrators and Soviet authorities as well as of local contemporary memory, all of which continue to provide avenues for further explorations. The editors deserve praise for collecting them together in one highly readable and inspiring volume."
—Slavic Review


“This valuable collection, the result of foresight by its outstanding editors, is an important milestone on the way toward a fuller scholarly understanding of the Holocaust in the East—and thus of the Holocaust itself.”
—Timothy Snyder, Yale University

“The study of the Second World War and of the Holocaust has gained immeasurably from the shift to the European East, to the sites of the fiercest battles and the most horrendous acts of annihilation. With a keen eye to the challenging questions of newly available but often haphazardly available and tainted sources, this volume of essays focuses on two main themes. First, microhistories reveal both the ‘modern’ ferocity and the startling varieties of destruction and extermination. Second, the puzzling ambivalence of the Soviet reaction to the Holocaust suggests at the very least that the Soviet Union was not a friend of Nazism’s main victim, the Jews. Neither was anyone else in 1941, which is the most sobering realization that emerges from these pages.”
—Michael Geyer, University of Chicago

Michael David-Fox is professor at the Edmund A. Walsh School of Foreign Service and the department of history, Georgetown University. He is the author of Showcasing the Great Experiment: Cultural Diplomacy and Western Visitors to the Soviet Union, 1921–1941 and Revolution of the Mind: Higher Learning among the Bolsheviks, 1918–1929. With Peter Holquist and Alexander M. Martin, he coedited Fascination and Enmity: Russia and Germany as Entangled Histories, 1914–1945.
Peter Holquist is associate professor of history at the University of Pennsylvania and the author of Making War, Forging Revolution: Russia’s Continuum of Crisis, 1914–1921.
Alexander M. Martin is associate professor of history at the University of Notre Dame. He is the author of Romantics, Reformers, Reactionaries: Russian Conservative Thought and Politics in the Reign of Alexander I and Enlightened Metropolis: Constructing Imperial Moscow, 1762–1855.
Loading...
or support indie stores by buying on