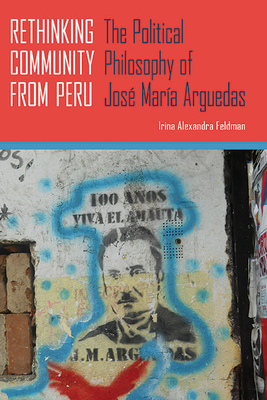 Peruvian novelist, poet, and anthropologist José María Arguedas (1911–1969) was a highly conflicted figure. As a mestizo, both European and Quechua blood ran through his veins and into his cosmology and writing. Arguedas’s Marxist influences and ethnographic work placed him in direct contact with the subalterns he would champion in his stories. His exposés of the conflicts between Indians and creoles, and workers and elites were severely criticized by his contemporaries, who sought homogeneity in the nation-building project of Peru.

In Rethinking Community from Peru, Irina Alexandra Feldman examines the deep political connotations and current relevance of Arguedas’s fiction to the Andean region. Looking principally to his most ambitious and controversial work, All the Bloods, Feldman analyzes Arguedas’s conceptions of community, political subjectivity, sovereignty, juridical norm, popular actions, and revolutionary change. She deconstructs his particular use of language, a mix of Quechua and Spanish, as a vehicle to express the political dualities in the Andes. As Feldman shows, Arguedas’s characters become ideological speakers and the narrator’s voice is often absent, allowing for multiple viewpoints and a powerful realism. Feldman examines Arguedas’s other novels to augment her theorizations, and grounds her analysis in a dialogue with political philosophers Walter Benjamin, Jean-Luc Nancy, Carl Schmitt, Jacques Derrida, Ernesto Laclau, and Álvaro García-Linera, among others.

In the current political climate, Feldman views the promise of Arguedas’s vision in light of Evo Morales’s election and the Bolivian plurality project recognizing indigenous autonomy. She juxtaposes the Bolivian situation with that of Peru, where comparatively limited progress has been made towards constitutional recognition of the indigenous groups. As Feldman demonstrates, the prophetic relevance of Arguedas’s constructs lie in their recognition of the sovereignty of all ethnic groups and their coexistence in the modern democratic nation-state, in a system of heterogeneity through autonomy—not homogeneity through suppression. Tragically for Arguedas, it was a philosophy he could not reconcile with the politics of his day, or from his position within Peruvian society.

“A crucial result of Feldman’s reading of Arguedas as a political philosopher is a strong and entirely necessary argument about the need to revise the idea of the register, medium, and genre through which political thought is produced; the proposition, in other words, that we need to take seriously the idea that poesis is a necessary and significant register for theorization.”
—Adriana Michele Campos Johnson, University of California-Irvine

“With this book Irina Alexandra Feldman proves that José María Arguedas’s Todas las sangres is not just an epic novel. She applies contemporary political theory and shows that Todas las sangres is a thoughtful and pliant blueprint for a plurinational sovereignty still unattained and misunderstood in Arguedas’s beloved Peru, but not so unlike the plurinational state inaugurated in Bolivia in 2009.”
—Thomas Ward, Loyola University Maryland

"Feldman seeks to distill a political philosophy in Arguedas’s novels and identifies ‘community,’ ‘political subjectivity,’ ‘sovereignty,’ ‘juridical norm,’ and ‘revolutionary change’ as the key concepts. But her guiding thread is to contrast Arguedas’s view with what she calls ‘the idea of necessary homogenization for successful execution of any nation-building project,’ which, she contends, permeated Peruvian social science at the time."
—Julio F. Carrión, Latin American Research Review