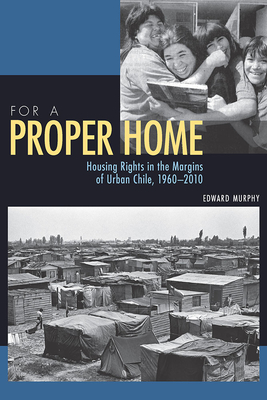 For a Proper Home

From 1967 to 1973, a period that culminated in the socialist project of Salvador Allende, nearly 400,000 low-income Chileans illegally seized parcels of land on the outskirts of Santiago. Remarkably, today almost all of these individuals live in homes with property titles. As Edward Murphy shows, this transformation came at a steep price, through an often-violent political and social struggle that continues to this day.

In analyzing the causes and consequences of this struggle, Murphy reveals a crucial connection between homeownership and understandings of proper behavior and governance. This link between property and propriety has been at the root of a powerful, contested urban politics central to both social activism and urban development projects. Through projects of reform, revolution, and reaction, a right to housing and homeownership has been a significant symbol of governmental benevolence and poverty reduction. Under Pinochet’s neoliberalism, subsidized housing and slum eradication programs displaced many squatters, while awarding them homes of their own. This process, in addition to ongoing forms of activism, has permitted the vast majority of squatters to live in homes with property titles, a momentous change of the past half-century.

This triumph is tempered by the fact that today the urban poor struggle with high levels of unemployment and underemployment, significant debt, and a profoundly segregated and hostile urban landscape. They also find it more difficult to mobilize than in the past, and as homeowners they can no longer rally around the cause of housing rights.

Citing cultural theorists from Marx to Foucault, Murphy directly links the importance of home ownership and property rights among Santiago’s urban poor to definitions of Chilean citizenship and propriety. He explores how the deeply embedded liberal belief system of individual property ownership has shaped political, social, and physical landscapes in the city. His approach sheds light on the role that social movements and the gendered contours of home life have played in the making of citizenship. It also illuminates processes through which squatters have received legally sanctioned homes of their own, a phenomenon of critical importance in cities throughout much of Latin America and the Global South.

Praise For For a Proper Home: Housing Rights in the Margins of Urban Chile, 1960-2010 (Pitt Latin American Series)…

“For a Proper Home makes a major contribution to understanding the politics of modern Chile and should enjoy a wide readership. Its ambitious scope, interdisciplinarity, and focus on the links between activism and consumption represent a cutting edge for historical studies of Latin America.”—American Historical Review


“In examining the history of struggles over low-income housing in twentieth-century Santiago, Murphy makes original, poignant, and compelling contributions to a range of fields: histories of property, housing, state formation, urban space, and citizenship, among others. . . . Subtle, well-reasoned, humane and deeply researched, this book should be required reading for scholars across the social sciences and humanities.” —Journal of Historical Geography

“For a Proper Home offers readers a compelling, nuanced account of the entangled nature of propriety, politics, and citizenship in the second half of the 20th and the first decades of the 21st century. (It) serves as an example for any ethnographer seriously committed to historical analysis, as well as for any historian interested in deepening their work through ethnography.(A) complex and engaging text, suitable for advanced undergraduates and graduate students in anthropology as well as history, urban planning, political science, and Latin American studies.”—City and Society


“This fascinating view of Chilean history contributes to a better understanding of how the country has experimented with different models of social and economic development and how poor citizens have crafted their own views of the state and democracy, one that includes their right to own homes. Highly recommended.”—Choice

“This book reoriented how I think about Chilean history in a fundamental way. . . . [It] adds layers of nuance and insight to existing scholarship on Chile. It will also appeal to those unfamiliar with Chilean history because it is so beautifully written.”—The Americas: A Quarterly Review of Latin American History

“Edward Murphy provides an engaging, well-researched, and bottom-up historical account of low-income residents in Santiago, Chile, from the 1960s to 2010.  By examining the intersections between citizenship and home ownership, Murphy reveals how Santiago’s housing movement became both a form of urban insurgency and a consolidation of traditional private property rights. . . . From the fascinating case of Santiago, the author also raises critical questions about urban growth in the global South and the different and similar ways that squatters and poor urban residents beyond Chile have been able to access a home.”—Hispanic American Historical Review

“Essential reading for anyone who wants to have, in a single book, a complete and very detailed critical depiction of the last 50 years of
Chile’s housing and urban struggles.” –International Journal of Urban and Regional Research

“Murphy has written a fascinating book. . . . In making the quest for a home central to his analysis of Chilean politics, he has reimagined Chilean politics.”
—Anthropological Quarterly

Edward Murphy is assistant professor of history and global urban studies at Michigan State University. He is the coeditor of The Housing Question: Tensions, Continuities, and Contingencies in the Modern City and Anthrohistory: Unsettling Knowledge, Questioning Discipline.
Loading...
or support indie stores by buying on