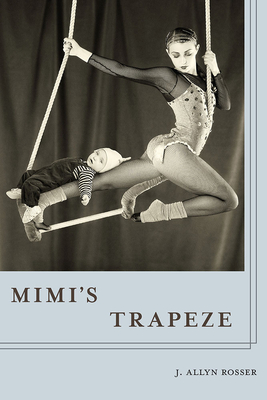 Rosser’s poems have always given a squinty sideways glance at cultural foibles and assumptions. Her distinctive brand of cheery skepticism implies that the genuine pursuit of truth is a virtue that renders tolerable the intolerable. These poems achieve a lyricism that gives free reign to the lush energies of language while remaining transparent enough to communicate something precise, fresh, and unsettling.

A driving force behind the poems in Mimi’s Trapeze is Rosser’s profound curiosity about all forms and conditions of life. Without distorting fact or motive, her speakers seek to navigate the mazes of our messy quotidian infelicities, ranging from imperfect love to squashing turtles on the road—from the history of artistic misrepresentations of women to global warming—attempting to calibrate the beautifully complex balance between desire and responsibility.

This collection dwells more on mortality and the lamentable state of the planet (and the spiritual unsoundness of its denizens) than her previous work. Another new vein can be traced in several poems that seek to distill a state like adolescence into a single word (“Dyahe”), reduce vast movements and disciplines into epigrammatic nutshells (Miniature Histories of the World”), or isolate a condition like grief in an element as simple as salt (“After the Service, the Widow Considers the Etymology of Salary”).

In Mimi’s Trapeze, her fourth book, Rosser takes a lighthearted view of dark subjects (see “Final Invitation”), and a dark view of light ones (“Intro to Happiness”). She has refined her vision, reaffirming her belief that poetry is the most direct and effective way for humans to alleviate their loneliness.

“If John Updike was the Fred Astaire of poetry--nimble, dexterous, witty, graceful--J. Allyn Rosser is the Ginger Rogers--witty, nimble, graceful, seemingly doing it ‘with the greatest of ease,’ as though soaring on a flying trapeze. As they said of Ginger, she could do everything Astaire did, and on high heels and backwards. There’s an element of Erma Bombeck’s sardonic humor in Rosser’s poems, but add to that the graceful, seamless use of rhyme, meter, poetic form, and she has you waltzing from page to page, speaking Tagalog in Manila or ‘wiseguy’ in New York, pirouetting through museums, cemeteries, malls, with odes to loss, failure, futility and break-up that evince just enough metaphysical speculation to make John Donne and Andrew Marvell drool; odes to a comforting, comfortable old shirt, pelicans and Canadian geese, seemingly almost any old things that captures her attention. . . . Rosser is entertaining as hell.”
—Chamber Four

"I've been an admirer of J. Allyn Rosser's poetry for years, and her fourth book adds to my enthusiasm. From the start her work has had more spark, more edge to it than one usually finds in formal verse-not that she's always 'formal' in the rhyme-and-meter sense. She's deliberate but light on her feet, as it were. . . . Rosser's sometimes pained or painful comedies are profoundly humane and, in the very best sense, artful."
—The Hudson Review

“Mimi’s Trapeze leaps from one stunning poem to the next. Writing with all the wit, polemical acumen, metaphorical daring, and formal skill of an eighteenth-century master, Rosser’s sensibility is a most welcome response to the patriarchal arguments of the past.”
—Harvard Review Online

“It’s a rare pleasure to follow the quick and pointed intelligence that animates Rosser’s poems. Some are sonnets, some are long and lean, but all have clear, idiosyncratic voices. They come bearing philosophy, nostalgia, rabies, chicken soup, and the head of Holofernes. They’re funny, tart, perceptive—good company. And more than one goes armed with a blackjack ending.”
—Sarah Lindsay

“J. Allyn Rosser’s poems are adept at using a probing wit to subvert conventions, the conventions of thought that keep us from exploring complex truth. In the evocative title poem, we can see this process worked out in an extended dramatic monologue of a woman attempting to get to the bottom of her conflicted relation to family history. Rather than narrowing to a point, the poems open out as they proceed, and as a result these lively celebrations of the ordinary crazy heart are full of discoveries.”
—Carl Dennis

“In Rosser’s poems, wit dances with grimness, and sorrow steps out stylishly dressed to kill. But their flash doesn’t obscure the darkling power of these poems; this is a gallant, inventive, large-hearted book.”
—Rosanna Warren

J. Allyn Rosser is the author of three previous poetry collections: Foiled Again, Misery Prefigured, and Bright Moves. She is the recipient of numerous awards, most recently the New Criterion Poetry Prize and fellowships from the Guggenheim and Lannan Foundations. Rosser is associate professor of English at Ohio University and is editor in chief of New Ohio Review.
or support indie stores by buying on