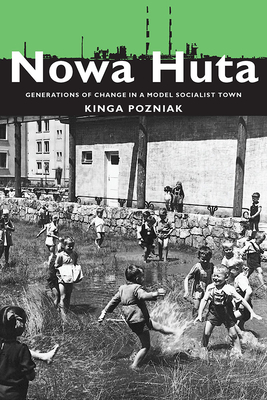 In 1949 construction of the planned town of Nowa Huta began on the outskirts of Kraków, Poland. Its centerpiece, the Lenin Steelworks, promised a secure future for workers and their families. By the 1980s, however, the rise of the Solidarity movement and the ensuing shock therapy program of the early 1990s rapidly transitioned the country from socialism to a market-based economy, and Nowa Huta fell on hard times.

Kinga Pozniak shows how the remarkable political, economic, and social upheavals since the end of the Second World War have profoundly shaped the historical memory of these events in the minds of the people who lived through them. Through extensive interviews, she finds three distinct, generationally based framings of the past. Those who built the town recall the might of local industry and plentiful jobs. The following generation experienced the uprisings of the 1980s and remembers the repression and dysfunction of the socialist system and their resistance to it. Today’s generation has no direct experience with either socialism or Solidarity, yet as residents of Nowa Huta they suffer the stigma of lower-class stereotyping and marginalization from other Poles.

Pozniak examines the factors that lead to the rewriting of history and the formation of memory, and the use of history to sustain current political and economic agendas. She finds that despite attempts to create a single, hegemonic vision of the past and a path for the future, these discourses are always contested—a dynamic that, for the residents of Nowa Huta, allows them to adapt as their personal experience tells them.

Kinga Pozniak is an anthropologist and visiting scholar at the University of Western Ontario.

“The story of the building of model industrial towns in the Eastern Bloc, such as Nowa Huta, Magnitogorsk, and Stalinstadt, has been richly told. But what fate befell such places when the curtain fell on state socialism? . . . Pozniak takes us on an absorbing journey through present-day Nowa Huta, interviewing its inhabitants in what turns out to be a quest for a usable past. . . . Pozniak’s fascinating study sheds light on the agency of common people in defining the meaning of their experiences, on the role of broader discourses in either reaffirming or marginalizing these stories, and on the political implications of this process. . . . This study will be of interest to historians, anthropologists, and sociologists working on state socialism and postsocialism.”
—American Historical Review

"This book will appeal to anyone interested in recent Polish history and culture, and has much to offer to those interested in post-socialist transitions, urban anthropology, post-industrialization, and memory. Pozniak's prose is accessible and she has a gift for concisely summarizing for the non-expert complex political and social changes in the region. As a result, her book will appeal to undergraduates. At the same time, Pozniak explores important questions about how hegemonic narratives are created and disseminated, about how they are used as tools to situate oneself vis-a-vis state projects, and about how they marginalize some and valorize others. Her explorations of these questions are subtle and profound to interest the professional scholar. And the fact that this is accomplished through the lens of Nowa Huta, a district experiencing multiple transitions, gives the book both humanity and allure."
—Council for European Studies

“Pozniak’s richly detailed and sympathetic portrayal is worthy of a wide audience.”
—Choice

“Well -written and engaging. Successfully highlights the salience of locality in mediating between personal experiences and public history. Should be of interest to urban scholars, anthropologists and sociologists not only working on eastern Europe but also to those attentive to local transformations generated by the global shift to neoliberalism.”
—Slavic Review

“Kinga Pozniak presents a fascinating study of generations of memory in Nowa Huta, the enormous planned city built to house tens of thousands of steel workers on the edge of Kraków. Intended to be a showcase of proletarian life, the end of communism and global economic changes have left residents with challenges and often conflicting memories. Pozniak lets the people of Nowa Huta speak for themselves and brings their past to life. This important book is thoroughly absorbing, invariably perceptive, and a pleasure to read.”
—John Merriman, Charles Seymour Professor of History, Yale University

“Filled with compelling stories and reflections from residents of Poland’s classic industrial town, this book provides one of the most illuminating accounts yet of changes in work and life from socialism to capitalism. Pozniak rejects the stale framework of ‘nostalgia’ and shows us memory as valuable sociological commentary. Her informants show a remarkable, non-ideological common sense that offers profound insights not just about transitions but about contemporary global capitalism. What a wonderful read!”
—David Ost, Hobart and William Smith Colleges

“Nowa Huta is about far more than the socialist company town and the Solidarity resistance that put it on the world map. Kinga Pozniak shows, masterfully, a brick-and-mortar setting in action as it becomes the stuff of negotiated memories and identities amid sweeping political, economic, and societal change. Nowa Huta is a fascinating treatise on ‘sites of memory’ everywhere.”
—Janine R. Wedel, George Mason University
or
Not Currently Available for Direct Purchase
Copyright © 2020 American Booksellers Association