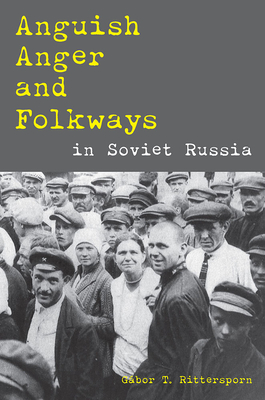 Anguish, Anger, and Folkways in Soviet Russia offers original perspectives on the politics of everyday life in the Soviet Union by closely examining the coping mechanisms individuals and leaders alike developed as they grappled with the political, social, and intellectual challenges the system presented before and after World War II. As Gábor T. Rittersporn shows, the “little tactics” people employed in their daily lives not only helped them endure the rigors of life during the Stalin and post-Stalin periods but also strongly influenced the system’s development into the Gorbachev and post-Soviet eras.

For Rittersporn, citizens’ conscious and unreflected actions at all levels of society defined a distinct Soviet universe.  Terror, faith, disillusionment, evasion, folk customs, revolt, and confusion about regime goals and the individual’s relation to them were all integral to the development of that universe and the culture it engendered.  Through a meticulous reading of primary documents and materials uncovered in numerous archives located in Russia and Germany, Rittersporn identifies three related responses—anguish, anger, and folkways—to the pressures people in all walks of life encountered, and shows how these responses in turn altered the way the system operated.

Rittersporn finds that the leadership generated widespread anguish by its inability to understand and correct the reasons for the system’s persistent political and economic dysfunctions.  Rather than locate the sources of these problems in their own presuppositions and administrative methods, leaders attributed them to omnipresent conspiracy and wrecking, which they tried to extirpate through terror.

He shows how the unrelenting pursuit of enemies exacerbated systemic failures and contributed to administrative breakdowns and social dissatisfaction. Anger resulted as the populace reacted to the notable gap between the promise of a self-governing egalitarian society and the actual experience of daily existence under the heavy hand of the party-state. Those who had interiorized systemic values demanded a return to what they took for the original Bolshevik project, while others sought an outlet for their frustrations in destructive or self-destructive behavior.

In reaction to the system's pressure, citizens instinctively developed strategies of noncompliance and accommodation. A detailed examination of these folkways enables Rittersporn to identify and describe the mechanisms and spaces intuitively created by officials and ordinary citizens to evade the regime's dictates or to find a modus vivendi with them.  Citizens and officials alike employed folkways to facilitate work, avoid tasks, advance careers, augment their incomes, display loyalty, enjoy life’s pleasures, and simply to survive. Through his research, Rittersporn uncovers a fascinating world consisting of peasant stratagems and subterfuges, underground financial institutions, falsified Supreme Court documents, and associations devoted to peculiar sexual practices.

As Rittersporn shows, popular and elite responses and tactics deepened the regime’s ineffectiveness and set its modernization project off down unintended paths. Trapped in a web of behavioral patterns and social representations that eluded the understanding of both conservatives and reformers, the Soviet system entered a cycle of self-defeat where leaders and led exercised less and less control over the course of events. In the end, a new system emerged that neither the establishment nor the rest of society could foresee.

"Makes a great contribution to our understanding of everyday life in the Soviet Union. With nuance and insight, it outlines key emotive, discursive, and tactical practices that officials and average citizens, peasants and workers, supporters and opponents, victims and perpetrators used to navigate and ultimately undermine the Soviet system
—The Russian Review

"Using a wide array of archival sources, Rittersporn offers new insights into the workings of the Soviet Union . . . His attention to the depth and breadth of conspiratorial thinking in the early Soviet period and to the generation of specifically Soviet folkways are especially noteworthy."
—Choice

“Employing  an abundance of  new archival  sources, Rittersporn weaves a rich tapestry of Soviet society in all its complexity, while at the same time being keenly aware of the difficulties of interpreting documents generated in an atmosphere of suspicion, denunciation and self-justification. By arguing that the Soviet leadership created the very resistance to their policies which they feared and then sought to repress, he plumbs the depth of the public’s paradoxical responses. He unearths a wide variety of their reactions— often expressed in borrowed if distorted terms from official rhetoric— ranging from anger, evasion, irreverence and confusion to violence and manipulation. Yet these ‘folkways’ as he calls them frequently ran counter to the equally widespread commitment to Bolshevik ideals. What emerges is a moving, collective portrait of individuals striving to make sense out of a world in which the professed aspirations of the highest authority to create a new, just and abundant society departed so radically from the harsh reality that engulfed them.”
—Alfred J. Rieber, University Professor Emeritus, The Central European University, Budapest Hungary

“In this groundbreaking and original work, Rittersporn explores how ideas of omnipresent conspiracy, spies, and ‘wreckers’ fostered confusion, inefficiencies, and deep pathologies both for individuals and the Soviet system. Moving deeper than social history into the emotional aspects of fidelity and deviance, he illustrates how Soviet men and women used folkways and discursive conventions to tack between official visions of socialism and the actual ways the system worked.”
—Ronald Grigor Suny, University of Michigan

“This uncompromising and nuanced book dispels all illusions scholars may have had about our ability to provide a definitive, unified, or unambiguous judgment on the Soviet system. In this lies its great achievement. A major contribution to continuing efforts toward understanding the everyday lives of Soviet citizens.”
—Irina Paperno, University of California, Berkeley
or
Not Currently Available for Direct Purchase
Copyright © 2020 American Booksellers Association