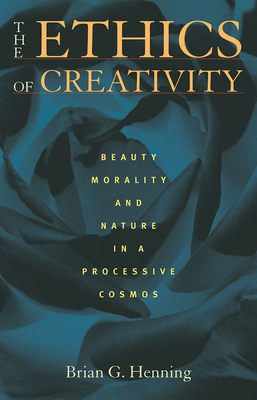 The Ethics of Creativity

Beauty, Morality, and Nature in a Processive Cosmos

A central concern of nearly every environmental ethic is its desire to extend the scope of direct moral concern beyond human beings to plants, nonhuman animals, and the systems of which they are a part. Although nearly all environmental philosophies have long since rejected modernity’s conception of individuals as isolated and independent substances, few have replaced this worldview with an alternative that is adequate to the organic, processive world in which we find ourselves.  In this context, Brian G. Henning argues that the often overlooked work of Alfred North Whitehead has the potential to make a significant contribution to environmental ethics. Additionally inspired by classical American philosophers such as William James, John Dewey and Charles Sanders Pierce and environmental philosophers such as Aldo Leopold, Peter Singer, Albert Schweitzer, and Arne Naess, Henning develops an ethical theory of which the seminal insight is called “The Ethics of Creativity.”

By systematically examining and developing a conception of individuality that is equally at home with the microscopic world of subatomic events and the macroscopic world of ecosystems, The Ethics of Creativity correctly emphasizes the well-being of wholes, while not losing sight of the importance of the unique centers of value that constitute these wholes.  In this way, The Ethics of Creativity has the potential to be a unique voice in contemporary moral philosophy.


Praise For The Ethics of Creativity: Beauty, Morality, and Nature in a Processive Cosmos…

Brian Henning has produced a veritable vade mecum of reflections upon the intertwining and implications of metaphysical, aesthetic, and ethical issues in the work of Whitehead. He forcefully and insightfully places creativity at the very heart of Whitehead's philosophical project. This category of the ultimate, meant to specify the most fundamental feature of cosmic process, is rotated in resolute and perspicuous fashion by Henning in a set of chapters that mix, in appropriate, but not fully separated, measures, exposition, argumentation, and application.
—Society for the Advancement of American PhilosophyNewsletter

"A rigorous work of ethical philosophy for the new millenium."
--Process Studies

“Henning does a good job showing how a Whiteheadean-based ethics overlaps with traditional moral theories in important and valuable ways, and also how it goes beyond them both in its comprehensiveness and its overall promise. It is in his suggestions regarding the ethical promise of a Whiteheadean, kalogenoc world view that Henning’s work is most noteworthy—and hence deserving of considered attention by anyone interested in rethinking the dominant world views.”—Philosophy in Review

“Henning explores many of history’s finest philosophers of environmental ethics in his composition of a beauty ethic that expands our sphere of moral concern beyond living things. This remarkable philosophical work also includes Jenning’s formal ‘obligation of beauty,’ beseeching each of us ‘to always act in such a way so as to bring about the greatest possible universe of beauty, value, and importance that in each situation is possible.’”
—Foreword Reviews

“Essential reading for both process thinkers/American pragmatists as well as environmental ethicists. . . .Henning lays out, in Jamesian fashion, his view of a genuinely ethical universe. This view both borrows from virtue ethics, utilitarianism, and deontology and also improves on them. No small accomplishment!”
—Daniel A. Dombrowski, Seattle University

“This book provides a remarkably clear and attractive foundation for an ethic that seamlessly binds human social justice to a wider moral engagement with the natural environment. Enhancing intrinsic beauty everywhere is shown to be our deepest obligation and our highest joy.”
—Frederick Ferré, University of Georgia

“Morality is about valuing intensively and comprehensively. Our concern is recognizing, appreciating, and affirming what nature has generated of intrinsic value. With his focus on creativity, Henning throws into a new light all the classical concerns of ethics--persons, pleasures, pains, life, death, rights, utilities, virtues, the beautiful, the ugly, the good, the evil. He exemplifies the creative process he so much celebrates. Often demanding, this is always a most illuminating analysis: ethics taken at the pitch.”
—Holmes Rolston, III, University Distinguished Professor and Professor of Philosophy, Colorado State University