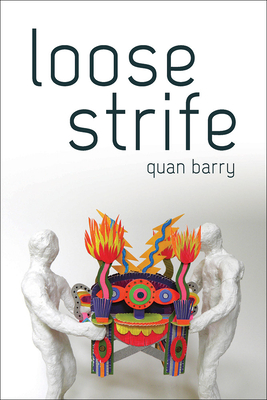 In poems initially inspired by Aeschylus’ fifth-century B.C. trilogy “The Oresteia,” which chronicles the fall of the House of Atreides, Loose Strife investigates the classical sense of loose strife, namely “to loose battle” or “sow chaos,” a concept which is still very much with us more than twenty-five hundred years later.

“Violence across history, from Greek myth to modern American serial killers and the Cambodian genocide, animates this disturbing and graphically original fourth effort from Barry (Asylum). She utilizes dual-justified and unusually arrayed text to fit stark scenes where we find someone ‘hiding in a space meant/ for buckets and rags as// next door the soldiers/ drag away a young boy,’ or, in a modified ghazal, a witness at Golgotha watching ‘a man nailed like/ a bloody flag to two pieces of/ wood.’ Taking in ecological as well as human horror, falling gingko pods remind Barry of failing satellites, ‘all of which some day will come tumbling back.’ In a series of poems that belong together despite their diverse scenes, she tries ‘to describe the unimaginable/ in a time and a place when sadly everything is imaginable.’ Those vivid pictures, and their self-consciousness about what it means to narrate extremities, perhaps benefit from the book's origin in a collaboration between Barry and visual artist Michael Velliquette. And yet the book stands up, and stands out, on its own. Barry risks the lurid, and the knowing, but comes out more like a prophet, overwhelmed-sometimes sublimely so-by the first- and second-hand truths she must convey.”
—Publishers Weekly (starred review)

"Born in Saigon and raised in Boston, Barry is the author of three previous collections of poetry and a novel, She Weeps Each Time You're Born. In a review of Water Puppets (2011), one critic says, 'violence is a shocking misfortune that remains foreign, beyond [Barry's] personal borders.' And yet, in this book, Barry's poems take jarring, strange arrangements on the page: scrambled and center-spaced with black bars across lines like censored transcripts. The unusual use of space enacts a subtle violence on the reader, frustrating expectations of how poetry should appear. Likewise, 'loose strife' refers to the sowing of chaos in the tragic plays of the Oresteia, and an undercurrent of deconstructed Greek pervades the work ('Pandora's Box, from the Greek word / pithos,  what in actuality was a jar, an urn'). In one poem, Barry quotes the aforementioned review and responds with a story of being 'robbed at gunpoint on a deserted road.' Barry offers a difficult, sophisticated look at violence in personal, historical, and textual forms."
—ALA Booklist

"The existential pulse is strong in the pages of Loose Strife because of the unrelenting evidence that human life (particularly female life) is collateral damage to humanity’s political machinations and cultural dogmata. Values that are designed for instruction are (mis)used for destruction. . . . Loose Strife, which ultimately stitches together the dark history of humanity into a single volume of verse, is Barry’s most compelling response yet to that question: hate doesn’t end, hate doesn’t stop."
—Rigoberto González, Los Angeles Review of Books

“In her fourth collection, Barry reveals how a master can manipulate what might at first appear like an obsession into a thoughtful and vivid meditation. . . . Barry’s imagination is rich, her experience broad, and her work fastidious, so the result of her ruminations on the concept of strife is rewarding, even imposing, though her book reads less as an exercise in virtuosity and more as the honed practice of the poet as both thinker and advocate.”
—Pleiades Book Review

Quan Barry is the author of three previous poetry collections: Asylum, winner of the Agnes Lynch Starrett Poetry Prize; Controvertibles; and Water Puppets, winner of the Donald Hall Prize in Poetry. She is also the author of the novel She Weeps Each Time You’re Born. Barry has received two fellowships from the National Endowment for the Arts in both poetry and fiction. She is professor of English at the University of Wisconsin-Madison.
or support indie stores by buying on