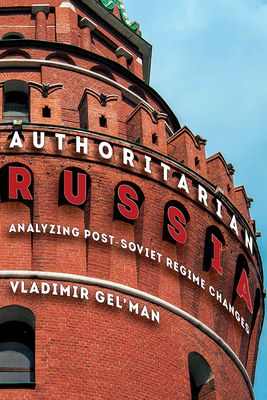 Russia today represents one of the major examples of the phenomenon of “electoral authoritarianism” which is characterized by adopting the trappings of democratic institutions (such as elections, political parties, and a legislature) and enlisting the service of the country’s essentially authoritarian rulers. Why and how has the electoral authoritarian regime been consolidated in Russia? What are the mechanisms of its maintenance, and what is its likely future course? This book attempts to answer these basic questions.
Vladimir Gel’man examines regime change in Russia from the collapse of the Soviet Union in 1991 to the present day, systematically presenting theoretical and comparative perspectives of the factors that affected regime changes and the authoritarian drift of the country. After the fall of the Soviet Union, Russia’s national political elites aimed to achieve their goals by creating and enforcing of favorable “rules of the game” for themselves and maintaining informal winning coalitions of cliques around individual rulers. In the 1990s, these moves were only partially successful given the weakness of the Russian state and troubled post-socialist economy. In the 2000s, however, Vladimir Putin rescued the system thanks to the combination of economic growth and the revival of the state capacity he was able to implement by imposing a series of non-democratic reforms. In the 2010s, changing conditions in the country have presented new risks and challenges for the Putin regime that will play themselves out in the years to come.

From: Six must read books on Russia from the last 25 years
"In my opinion, [Authoritarian Russia] best explains the political backdrop in Russia today. . . . [Gel'man] looks at the actions taken by Mikhail Gorbachev, which led to the Yeltsin regime and, in turn, the actions taken by Yeltsin that inevitably led to the Putin regime. He then identifies actions and changes made by Putin aimed at extending his position of power at least through another term. He looks at how the trappings of democratic institutions (such as elections and a legislature) have been used, especially by Yeltsin, to create the system of power the country has today. The book is also one of the very few which leaves emotion and bias out of the analysis, and looks pragmatically at what may happen next and what factors, over what period, may lead to changes."
—Johnson's Russia List

“Vladimir Gel'man is one of the most astute observers of Russia’s political development. In this excellent monograph he has analyzed Russia’s post-Communist regimes, bringing together thorough research with a broad synthesis of recent theoretical work on authoritarianism. The product is a valuable statement of Russia’s political situation, offering both sobering analysis of the Putin elite and some hope for the future.”
—Russian Review

“[Gel'man] combines a deep knowledge of Russian political actors, processes, and institutions with a careful reading of relevant comparative politics literatures. Gel'man wears his learning lightly and the book is very readable. The result is a book that is both one of the best short introductions available to Russian political development and one of the most sophisticated.”
—Democratization

“An excellent and very timely attempt to understand what is behind regime change in Russia. The book provides deep insights into Russian policy-making and definitely  deserves readers’ attention. It greatly contributes to the scholarship on political transition and will be especially intriguing to political scientists and to everyone interested in Russian politics.”
—East European Politics

“The empirical analysis of Authoritarian Russia is a rich synthesis of Russia’s post-Soviet developments and recent theoretical advancements in the study of democratization and its authoritarian competitors.”
—Perspectives on Politics

“Few observers have the intellectual prowess or practical on-the-scene experience that Gel'man brings to his assessment of Russian political realities. The informed student of Russia takes any work by Gel'man seriously, and he does not disappoint in this important and insightful book. This volume should be mandatory reading for all students of Russian politics."
—Slavonic and East European Review


"One of the best and most readable up-to-date introductions to the history of post-Soviet Russia's regime developments available on the market today . . . Anyone interested in why Russia's leadership acts the way it does should read this book."
—Soviet and Post-Soviet Review

"An insightful and clearly explained analysis of political developments in Russia . . . a relatively short but sophisticated account of Russia's political development since the collapse of the Soviet Union in 1991, explaining why democracy failed to take root. It is a hugely readable book and avoids getting bogged down in detail (there is a lot to cover) whilst leaving you with the confidence that this is the work of someone with a deep knowledge of the Russian political system."
—Journal of Soviet and Post-Soviet Politics and Society

Vladimir Gel’man is professor of political science at the European University at St. Petersburg, Russia, and Finland Distinguished Professor at the Aleksanteri Institute, University of Helsinki. He is the author or editor of more than twenty books in Russian and English, including Resource Curse and Post-Soviet Eurasia: Oil, Gas, and Modernization and The Politics of Sub-National Authoritarianism in Russia.
Loading...
or support indie stores by buying on