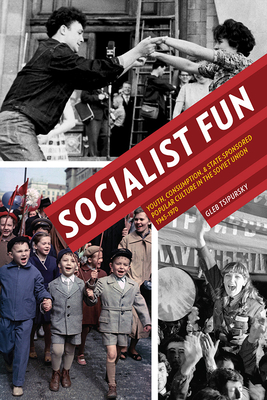 Most narratives depict Soviet Cold War cultural activities and youth groups as drab and dreary, militant and politicized. In this study Gleb Tsipursky challenges these stereotypes in a revealing portrayal of Soviet youth and state-sponsored popular culture.
The primary local venues for Soviet culture were the tens of thousands of klubs where young people found entertainment, leisure, social life, and romance. Here sports, dance, film, theater, music, lectures, and political meetings became vehicles to disseminate a socialist version of modernity. The Soviet way of life was dutifully presented and perceived as the most progressive and advanced, in an attempt to stave off Western influences. In effect, socialist fun became very serious business. As Tsipursky shows, however, Western culture did infiltrate these activities, particularly at local levels, where participants and organizers deceptively cloaked their offerings to appeal to their own audiences. Thus, Soviet modernity evolved as a complex and multivalent ideological device.
Tsipursky provides a fresh and original examination of the Kremlin’s paramount effort to shape young lives, consumption, popular culture, and to build an emotional community—all against the backdrop of Cold War struggles to win hearts and minds both at home and abroad.

Gleb Tsipursky is assistant professor of history at The Ohio State University.

"An invaluable resource for cultural studies students who are interested in the Soviet period."
—H-Net Reviews

“Fascinating, original, and superbly researched. The emphasis on state-sponsored leisure culture is particularly important because it opens a window in the interactions between the state and ‘ordinary’ Soviet youth, that is, those who were not members of the intelligentsia.”
—Denise Youngblood, University of Vermont

“Exciting work. Based on a breathtakingly wide research base, Tsipursky combines multiple archives with extensive interviews from former participants in cultural programs, from the late 1940s to early 1960s, to unlock private memories, photographs, and other rare materials to give a unique perspective on post-Stalinist youth culture.”
—Lynn Mally, University of California, Irvine
or support indie stores by buying on
Copyright © 2020 American Booksellers Association