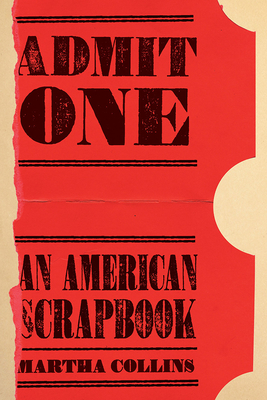 Praise for Martha Collins:
“A dazzling poet whose poetry is poised at the juncture between the lyric and ethics, Martha Collins has addressed some of the most traumatic social issues of the twentieth century . . . in supple and complex poems. . . .[N]o subject is off limits for her piercing intellect.”
—Cynthia Hogue, AWP Chronicle


Praise For Admit One: An American Scrapbook (Pitt Poetry Series)…

"A strikingly original collection that combines brilliant storytelling and compelling commentary on ethics and race. . . . Exquisitely spare, these works recount some of the sinister moments of American history, quietly pushing readers to learn from those episodes and consider our collective responsibility for them." —Washington Post

"An unflinching look at the underpinnings of racism in the U.S. . . . Her poems are lists, definitions, newspaper pages, historical time lines, and biographical facts. These diverse poetic forms highlight the beauty of diversity itself. But Collins never lets up on the driving themes of unethical treatment and collective culpability." —Booklist

“Like any scrapbooker, Collins collects and assembles, and largely lets the scraps do the talking. But when she reveals to us the collector's hand, injecting the personal like handwritten notes in the margins, she reminds us that we are not merely witnesses to history. We are its participants, inheritors, and bloodline. This is what I want my students to feel, to have the historical brought to life and made personal. I may have been doing it wrong, but Collins' poetry offers a path in the right direction.” —masspoetry.org


“Collins goes past the paralyzing silence of white guilt and into the active language of implication. One feels in her work the compulsion to discover, and to confront. Poetry is the vehicle of response for Collins, and we are the richer for having the results of her grappling. She locates our country’s legacy of racism in her own familial connections, therefore speaking from a position more like witness than judge.” —Solstice Magazine

"Collins' brilliantly disturbing verse leaves us with the grim hope that imperial whiteness can give way to incendiary witness." —Radcliffe Magazine

“In Admit One Collins traces the ideological constellation of scientific racism illustrating how it was used to justify not just racism, but also colonialism, xenophobia, and the sterilization of those deemed physically, mentally, or morally ‘unfit.’” —Literary Imagination

In Admit One: An American Scrapbook, Martha Collins relentlessly traces the history of scientific racism from the 1904 St. Louis World's Fair through the eugenics movement of the 1920s. Using a wide variety of documentary sources, including her Illinois grandfather’s newspaper, Collins constructs a “scrapbook” of fragments, quotations, narrative passages, and lyrical riffs that reveal startling connections between the Fair, the Bronx Zoo, and ideas that culminated in anti-immigration, anti-miscegenation, and eugenic sterilization laws in 1924. Among the book’s recurring elements are evolving portraits of the “exhibited” African Ota Benga, the sterilization victim Carrie Buck, and the eugenicist Madison Grant, whose reach extended to Nazi Germany. Following the practice begun in her book-length poem Blue Front and continued in her exploration of race in White Papers, Collins combines careful research with innovative poetic techniques to create an arresting account of a segment of American history that haunts us even today. Admit One is a brilliant, troubling, necessary read.