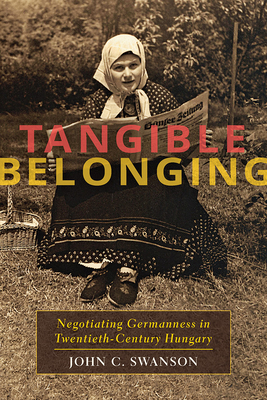 Tangible Belonging presents a compelling historical and ethnographic study of the German speakers in Hungary, from the late nineteenth to the late twentieth century. Through this tumultuous period in European history, the Hungarian-German leadership tried to organize German-speaking villagers, Hungary tried to integrate (and later expel) them, and Germany courted them. The German speakers themselves, however, kept negotiating and renegotiating their own idiosyncratic sense of what it meant to be German. John C. Swanson’s work looks deeply into the enduring sense of tangible belonging that characterized Germanness from the perspective of rural dwellers, as well as the broader phenomenon of “minority making” in twentieth-century Europe.
The chapters reveal the experiences of Hungarian Germans through the First World War and the subsequent dissolution of Austria-Hungary; the treatment of the German minority in the newly independent Hungarian Kingdom; the rise of the racial Volksdeutsche movement and Nazi influence before and during the Second World War; the immediate aftermath of the war and the expulsions; the suppression of German identity in Hungary during the Cold War; and the fall of Communism and reinstatement of minority rights in 1993.
Throughout, Swanson offers colorful oral histories from residents of the rural Swabian villages to supplement his extensive archival research. As he shows, the definition of being a German in Hungary varies over time and according to individual interpretation, and does not delineate a single national identity. What it meant to be German was continually in flux. In Swanson’s broader perspective, defining German identity is ultimately a complex act of cognition reinforced by the tangible environment of objects, activities, and beings. As such, it endures in individual and collective mentalities despite the vicissitudes of time, history, language, and politics.

John C. Swanson is professor and department head of history at the University of Tennessee at Chattanooga. He is the author of The Remnants of the Habsburg Monarchy: The Shaping of Modern Austria and Hungary, 1918–1922.

Given the turbulent history of Central and Eastern Europe, historians have tended to focus on the ethnic and nationality conflicts that follow a narrative of either steps toward national awakening or a struggle for liberation against an oppressor. Swanson provides an alternative approach in this magnificent book about German-speaking minority in Hungary. —Choice

“Sophisticated and searching, Tangible Belonging tells the story of Hungary's German-speaking peasantry, showing how ordinary people's identities were made and unmade across the tumultuous twentieth century. Rich ethnographic details fill the pages, and we encounter absorbing passages on everything from house design to hobby genealogists. A fascinating, important book.”
—Robert Nemes, Colgate University

". . . delivers a rich picture of Danube Swabian in modern Hungary. Its presentation is not restricted to political developments, but includes captivating descriptions of social mores and practices. . . . Swanson has filled an important gap in English-language historiography on twentieth-century Hungary and the forming of national minorities. Its thorough and nuanced analysis of an often-neglected topic will prove invaluable to an international audience."
—Slavic Review