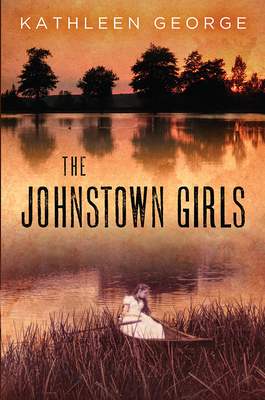 Ellen Emerson may be the last living survivor of the Johnstown flood. She was only four years old on May 31, 1889, when twenty million tons of water decimated her hometown of Johnstown, Pennsylvania. Thousands perished in what was the worst natural disaster in U.S. history at the time. As we witness in The Johnstown Girls, the flood not only changed the course of history, but also the individual lives of those who survived it.

A century later, Pittsburgh Post-Gazette reporters Ben Bragdon and Nina Collins set out to interview 103-year-old Ellen for Ben’s feature article on the flood. When asked the secret to her longevity, Ellen simply attributes it to “restlessness.” As we see, that restlessness is fueled by Ellen’s innate belief that her twin sister Mary, who went missing in the flood, is somehow still alive. Her story intrigues Ben, but it haunts Nina, who is determined to help Ellen find her missing half.

Novelist Kathleen George masterfully blends a history of the Johnstown flood into her heartrending tale of twin sisters who have never known the truth about that fateful day in 1889—a day that would send their lives hurtling down different paths. The Johnstown Girls is a remarkable story of perseverance, hard work, and never giving up hope in the face of seemingly insurmountable odds. It’s also a tribute to the determination and indomitable spirit of the people of Johnstown through one hundred years, three generations, and three different floods.

Kathleen George is the author of seven mysteries set in Pittsburgh: A Measure of Blood, Simple, The Odds, which was nominated for the Edgar® Award from the Mystery Writers of America, Hideout, Afterimage, Fallen, and Taken. She is also the author of the short story collection The Man in the Buick and editor of another collection, Pittsburgh Noir. George is a professor of theater arts and creative writing at the University of Pittsburgh and has published several books on theater, including Rhythm in Drama and, most recently, Winter’s Tales: Reflections on the Novelistic Stage. She was born in Johnstown, Pennsylvania.

Praise For The Johnstown Girls…

“Ellen Emerson is the oldest known survivor of the legendary Johnstown flood of 1889. Now, as the flood’s centennial year approaches, reporter Ben Bragdon and his girlfriend, Nina Collins, sit down to hear her story one more time for posterity. When Ben asks her for anything new she might be able to recall, Ellen not only obliges with a detail she’s kept to herself all this time but also admits to believing that her twin, assumed dead in the flood 100 years ago, is still alive somewhere today, and she doesn’t want to die before finding her. Intent on helping Ellen find her sister, Nina begins the search, while Ben concentrates on writing the flood piece and rekindling his failing marriage. Though seemingly separate, the stories, Ben and Nina’s in the present and Ellen’s in the past, share a common theme of strength and perseverance in the face of hardship. The resulting narrative is a noble tribute to the people and history of Johnstown and to the unassailable spirit of independent women through the years.”
—Booklist

"Edgar-finalist George successfully moves to period fiction with this evocative, historically themed whodunit, set in 1989, as the great Johnstown, Pa, flood approaches its centennial. . . . George offers complex and rewarding storytelling that pays tribute to not only the magnitude of the disastrous flood but also the resilience of Johnstown and its citizens."
—Publishers Weekly

“A story with characters that feel so real that it’s sometimes hard to remember the book is a work of fiction. This is further compounded by the vivid descriptions of the flood that correspond with historical accounts and the fact that the story is set in very real locations. . . . A colorful account of one of the most traumatic moments in Pennsylvania’s history and the lives it changed.”

“The Johnstown Flood is a huge story—the American people were aghast at the loss of life and the wholesale destruction of this industrial city. The personal stories of this epic tragedy were often overshadowed by the sheer magnitude of the event. Kathleen George succeeds wonderfully in portraying the ways in which a shattering event can rearrange the fate of individual lives. She knows and loves southwestern Pennsylvania and its people. As with her mysteries, The Johnstown Girls strongly evokes the people and way of life of the region.”
—Richard Burkert, President, Johnstown Flood Museum

“The interesting history informing Kathy George’s The Johnstown Girls is woven into a moving novel whose characters are fully realized, whose scope is wide reaching, and whose story is compelling. Pittsburghers especially will love the local color of places like Kennywood and Homestead, and learning more about Johnstown, where so many Pittsburghers grew up. But this is a book for readers everywhere who like to learn history while in the certain hands of a wonderfully accomplished novelist.”
—Jane McCafferty, author of First You Try Everything and One Heart

“The 125th anniversary of the devastating Johnstown Flood will be observed on May 31, 2014. Thousands perished. It was the worst natural disaster in U.S. history at the time. The author has captured the drama of these real events and blended the personal storylines of
wonderful characters to pay tribute to the people of Johnstown, Pa. Bravo, Ms. George. You have shown the true grit and spirit of this American town.”

“The story of the flood was fascinating.”

“Brings not just May 1889 but also the entire twentieth century to life for readers. In ‘The Johnson Girls,’ George introduces readers to the class issues that others have featured in the story of the flood, but in tracing the lives of her main characters after the flood she also subtly forces readers to contemplate the gender, race, and class issues that prevailed throughout the twentieth century. . . A meaningful story that builds on historical reality while painting a larger picture that goes well beyond the one event. . . the goal of the novel is not to retell the well-known story but to give it a human face that reflects, but does not necessarily recount, the history. George succeeds at this."