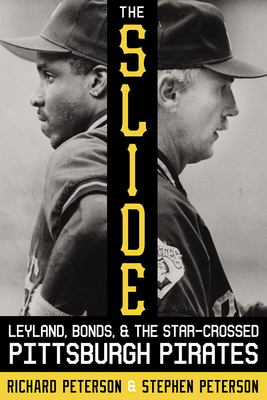 Leyland, Bonds, and the Star-Crossed Pittsburgh Pirates (The Library of Pittsburgh Sports History)

In the deciding game of the 1992 National League Championship Series against the Atlanta Braves, the Pittsburgh Pirates suffered the most dramatic and devastating loss in team history when former Pirate Sid Bream slid home with the winning run. Bream’s infamous slide ended the last game played by Barry Bonds in a Pirates uniform and sent the franchise reeling into a record twenty-season losing streak. The Slide tells the story of the myriad events, beginning with the aftermath of the 1979 World Series, which led to the fated 1992 championship game and beyond. It describes the city’s near loss of the team in 1985 and the major influence of Syd Thrift and Jim Leyland in developing a dysfunctional team into a division champion. The book gives detailed accounts of the 1990, 1991, and 1992 division championship seasons, the critical role played by Kevin McClatchy in saving the franchise in 1996, and summarizes the twenty losing seasons before the Pirates finally broke the curse of “the slide” in 2013, with their first playoff appearance since 1992.

Richard “Pete” Peterson is the author and editor of several baseball books, including The Pirates Reader, Growing Up With Clemente, Pops: The Willie Stargell Story,  and Extra Innings: Writing on Baseball. He is coeditor (with David Shribman) of 50 Great Moments in Pittsburgh Sports. A Pittsburgh native, Peterson is professor emeritus of English at Southern Illinois University.

Stephen Peterson has worked as a teacher and screenwriter for the last ten years. He resides in Los Angeles, CA.


Praise For The Slide: Leyland, Bonds, and the Star-Crossed Pittsburgh Pirates (The Library of Pittsburgh Sports History)…

“Vividly recreates the circumstances that eroded what should have been an extended run of success. Fine reading for any baseball fan.”
—Booklist

“For baseball fans curious to understand how players felt in the wake of those early '90's playoff shortcomings, there's much to like. If they want the scoop on how the team almost left town, only to be saved by a group headed by Kevin McLatchy, or how PNC Park came to be built, The Slide touches all the necessary bases.”

“The time I spent in Pittsburgh was special for me and my family. A great atmosphere that included teammates, neighbors, employees, and fans. I’m happy to relive some of those memories with this book.”
—Doug Drabek, former Pirate