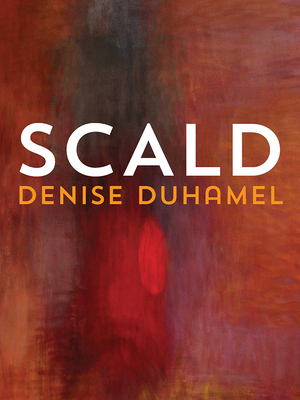 When her “smart” phone keeps asking her to autocorrect her name to Denise Richards, Denise Duhamel begins a journey that takes on celebrity, sex, reproduction, and religion with her characteristic wit and insight. The poems in Scald engage feminism in two ways—committing to and battling with—various principles and beliefs.  Duhamel wrestles with foremothers and visionaries Shulamith Firestone, Andrea Dworkin, and Mary Daly as well as with pop culture figures such as Helen Reddy, Cyndi Lauper, and Bikini Kill.  In dialogue with artists and writers such as Catherine Opie, Susan Faludi, and Eve Ensler, Duhamel tries to understand our cultural moment.  While Duhamel’s Scald can burn, she has more importantly taken on the role of the ancient Scandinavian “Skald,” one who pays tribute to heroic deeds.  In Duhamel’s case, her heroes are also heroines.

"In a spill of language and emotion often contained in the traditional form of the villanelle and pantoum, National Book Critics Circle finalist Duhamel (Blowout) explores women’s place in the world as part of nature, history, and culture and forever at sword’s edge with men. The first poem in the book's opening section, dedicated to Shulamith Firestone, takes a steely-eyed look at feminism as legacy and inevitability (‘having it both ways,’/ a phrase I hate/ as men always have it both ways)'. Later, in a poem on evolution, the line 'A woman’s real ancestors, not divine but animal' sums up the spirit throughout as we see the animal in the 'stellar explosion' of desire, the frank discussion of fornicating (or not), and one fabulous, juicy poem titled 'Porn Poem (With Andrea ­Dworkin).' VERDICT Duhamel’s deceptively informational, almost deadpan voice might at first puzzle but soon becomes incantatory, even obsessive. Engaging for a wide range of readers."
—Library Journal

"Duhamel’s new collection is also a new departure for her. Funny and satiric, always with an edge of existential sorrow, in her several collections up to and including Ka-Ching!, she became raging and rueful in recording the end of marriage and the search for new relationships, themes that also appear in Blowout. Always thoughtful, no matter how antic the incidents she depicts in a poem, Duhamel turns philosophically inquisitive in Scald, and she, once a prosy, projective-verse practitioner, adopts poetic forms to suit the nature of her questioning. Scald’s three sections are dedicated, respectively, to the twentieth-century radical feminists who most inspired Duhamel: philosopher of the body Shulamith Firestone, antipornography activist Andrea Dworkin, and verbally playful, antipatriarchal theologian MaryDaly. While never eulogizing them directly, Duhamel applies their central insights to her experiences as teacher, poet, and historically, politically, and socially conscious citizen. Those insights, especially that feminists must question not just Western culture and cultural organization per se but even “the very organization / of nature,” and that such deep analysis may be too demanding, pervade Scald, and their inescapability is emphasized by extensive use of the repetitive and circular verse forms of the pantoum and the villanelle as well as anaphora and extended alliteration in several prose poems. Her wit never fails her,but comedy is not an objective of these plainspoken, accessible poems of ideas."
—ALA Booklist (starred review)

“So many times I wanted/ to be outrageously political/ but then lost my nerve,” writes Duhamel (Blowout) in a book that at times toes the line of a feminist manifesto. She frequently employs the pantoum, and the form’s pattern of repeating lines has an obsessive quality that makes it appropriate for mulling over grand concepts: evolution, reproduction, the safety of a body. But modern minutiae also permeate these poems: the word “amazon” brings the website to mind before any of its cognates, and an autocorrected email signature conjures an alternate life: “In my new identity, I’m ten years younger,/ a lot skinnier, but I haven’t read much.” The poem “Rated R” is divided into sections named for film ratings: for example, paying your mortgage is “Restricted for Adult Activity,” the 2010 BP oil spill is “Restricted for Crude Situations,” and a bankrupt Trump Tower is “Restricted for Suggestive Material.” The book’s three sections bear the names of radical feminists (Firestone, Dworkin, and Daly), and the questions Duhamel asks often have a second-wave bent: “Why would women/ want to shoot anybody else,/ as they are so often victims of violence/ themselves?” Duhamel’s robust sense of humor and formal adventurousness make the text enjoyable even if some questions remain unanswerable.”
—Publishers Weekly

“. . . the poems in Scald, many of them pantoums and villanelles, seethe with the absurdity that so often characterizes the plight of women. . . . Scald is a terrific, humorous, thought-provoking collection. I can't imagine anybody not enjoying and being impressed by it.”
—South Florida Poetry Review

“What a great ride! What wonders! Humor, witchcraft, history, culture, the ‘Denise’ in every poem shining forth with that special Denise-ness! (You know what I mean.) The wild pantoums and villanelles: perfect vehicles for her subject. Which is WOMEN, which is POWERFUL WOMEN. I’m so grateful for Scald. I love that Denise Duhamel is in the world and that she has it by the tail.”
—Maureen Seaton

“As much a manifesto as it is a book of poems, Scald is Denise Duhamel’s great feminist statement—by way of pantoums and villanelles, of course. But more than a feminist, I would say that Duhamel is a humanitarian.  Her words dignify the disenfranchised.  Glory to Denise Duhamel for her formal ingenuity and her gleeful political imagination.”
—David Trinidad

Denise Duhamel’s most recent book of poetry, Blowout, was a finalist for the National Book Critics Circle Award. Her other titles include Ka-Ching!, Two and Two, Queen for a Day: Selected and New Poems, The Star-Spangled Banner, and Kinky. Duhamel is a recipient of fellowships from the Guggenhiem Foundation and the National Endowment for the Arts.  She is professor of English at Florida International University in Miami.
Loading...
or support indie stores by buying on