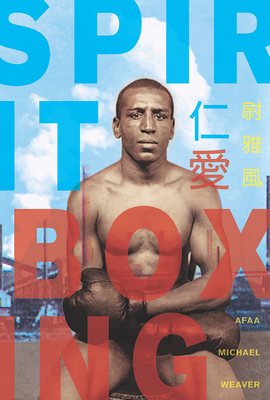 In Spirit Boxing, Weaver revisits his working class core. The veteran of fifteen years as a factory worker in his native Baltimore, he mines his own experience to build a wellspring of craft in poems that extend from his life to the lives that inhabit the whole landscape of the American working class. He writes with an intimacy that is unique in American poetry, and echoes previous comparisons of his oeuvre to that of Walt Whitman. The singularity of his voice resonates here through the prism of his realization of self through a lifelong project of the integration of American and Chinese culture. The work is Daoist in influence and structure as it echoes both a harmonic realization of context and the intuitive and transcendent dance of body, mind, and spirit.

Afaa Michael Weaver is the author of numerous poetry collections, including: The Plum Flower Dance: Poems 1985 to 2005; The Government of Nature, winner of the Kingsley Tufts Poetry Award; and City of Eternal Spring, winner of the Phyllis Wheatley Book Award. He is the recipient of an NEA fellowship, a Pew fellowship, four Pushcart Prizes, and a Fulbright scholar appointment, among other honors. In 1998, he became the first Elder of the Cave Canem Foundation. Weaver is alumnae professor of English at Simmons College in Boston.

"In this kinetic 11th collection, Weaver draws on his years as a “worker poet” to find the nightmarish urgencies in lives of quiet desperation: “shears cutting shiny tin into thin plates/ fast enough to cut the bone away so cleanly// a man has to remember to scream.” Weaver’s practice in taijiquan (tai chi), which references eight central energies in a circular arrangement of the universe, becomes an apt metaphor for the wheels of production and the repetition of workers’ nights and days; the heart of the collection is with in-between moments, in break rooms where self-declared white hillbillies can commiserate with African-American workers, where diverse realms of experience mingle, “ringing out truth’s raw gospel.” At times Weaver is unabashedly sentimental, and his empathy is a narrative strength as he investigates the life of a weary hardware store owner, a mother pushing her son’s wheelchair like a carriage, and the two old men who can love one another “in a small town where/ their oddness is safe.” Craftsmanlike in the best sense, mimetic of the textures and processes of assemblage, Weaver’s language is at its most transcendent in fusions of the technical and the numinous: “Geometry makes the soul of machines,/ a hypotenuse connecting the dark corners/ where wheels seethe with envy of wings."
—Publishers Weekly

“Afaa Michael Weaver reaffirms the value and necessity of a worker's poetics in his latest collection, Spirit Boxing. Here, work is not celebrated for its own sake or merely derided as drudgery, but is considered as link between generations and a primary source of hardship, solidarity, pain, pride, and joy.”
—the Literary Review

Past praise for Afaa Michael Weaver
“Weaver is one of the most significant poets writing today. With its blend of Chinese spiritualism and American groundedness, his poetry presents the reader (and the listener, for his body of work is meant to be read aloud) with challenging questions about identity, about how physicality and spirit act together or counteract each other to shape who we are in the world.”
—Henry Louis Gates, Jr. for Baltimore Magazine

Past praise for Afaa Michael Weaver
“Over the years, Weaver has listened to a chorus of other voices, the inflections of the past, as they have come together to shape and enlarge his own distinctive, musical voice. He has carved a unique space for himself in contemporary American poetry.”
—Edward Hirsch on Timber and Prayer

“Weaver finds a place in the legacy of Whitman and the mid-nineteenth century, when in the evolution of American poetry the glory of vernacular speech first became fused in verse with an inspired sense of the American self, sensuous and yet transcendent. His vision is local and focused, and as befits a poet of genuine depth and seriousness of purpose, it is as wide as the horizon itself.”
—Arnold Rampersad from his introduction to Multitudes
or
Buy Here
Copyright © 2020 American Booksellers Association