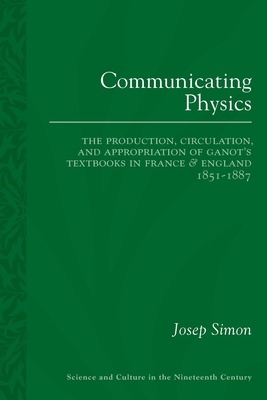 The Production, Circulation, and Appropriation of Ganot's Textbooks in France and England, 1851–1887 (Sci & Culture in the Nineteenth Century)

WINNER OF THE MARC-AUGUSTE PICTET PRIZE, 2010

The textbooks written by Adolphe Ganot (1804–1887) played a major role in shaping the way physics was taught in the nineteenth century. Ganot's books were translated from their original French into more than ten languages, including English, allowing their adoption as standard works in Britain and spreading their influence as far as North America, Australia, India and Japan.

Simon's Franco-British case study looks at the role of Ganot's two textbooks: Traité élémentaire de physique expérimentale et appliquée (1851) and Cours de physique purement expérimentale (1859), and their translations into English by Edmund Atkinson. The study is novel for its international comparison of nineteenth-century physics, its acknowledgement of the role of book production on the impact of the titles and for its emphasis on the role of communication in the making of science.

Praise For Communicating Physics: The Production, Circulation, and Appropriation of Ganot's Textbooks in France and England, 1851–1887 (Sci & Culture in the Nineteenth Century)…

"Simon's narrative of the development of texts aimed explicitly at physics examinations reveals important links to the medical and chemical fields."
—Victorian Studies

"Combining history of science, history of education, and book history, the author provides fresh perspectives on nineteenth-century physics by means of an original narrative based on a fine-grained study of the production, circulation, and appropriation of Ganot's famous textbook on physics."
—Ambix

"Simon has provided us with a detailed and authoritative study."
—Isis

Josep Simon is an associate professor in history of science, technology, and medicine, at Universidad del Rosario, Colombia.