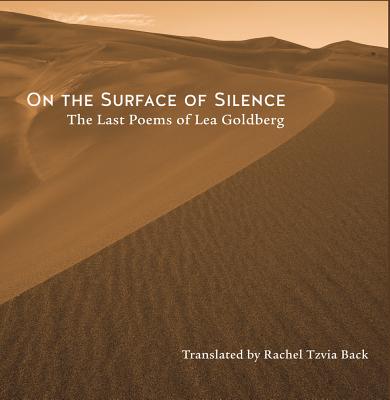 On the Surface of Silence

The Last Poems of Lea Goldberg

Rachel Tzvia Back offers the first-ever English language translation of the final poetry collection of Lea Goldberg, a preeminent and central poet of modern Hebrew poetry. These extraordinary texts, composed in the last years and even days of the poet’s life and published posthumously after her untimely death, exhibit a level of lyrical distillation and formal boldness that mark them as distinctive in the poet’s oeuvre. Often employing a fragment-like structure, where the unspoken is as present and forceful as the spoken, stripped of adornments and engaging the reader with an uncompromising, even disarming directness, Goldberg’s last poems enact and manifest a poetics of intrepid truth-telling. The play between revelation and concealment, the language precision and the unflinching end-of-life gaze, transform these texts into powerfully moving and often surprising poems. The book itself, in the original format as masterfully edited by Tuvia Ruebner and with drawings by Goldberg herself interspersed among the poems, is a significant and beautiful artifact of modern Hebrew culture.
This bilingual edition, with translations by award-winning translator and poet Rachel Tzvia Back, brings us poems from this singular poetic voice of the twentieth century—poems that will enrich, reflect, and stir the reader’s heart.

Praise For On the Surface of Silence: The Last Poems of Lea Goldberg…

"From the first works in this gutsy and moving collection to the last two poems, written in the hospital days before she died, Lea Goldberg strikes notes more clipped and blunt than ever before. As translator Rachel Tzvia Back argues in her introduction, Goldberg’s last poems mark a new poetic minimalism that is ‘unadorned, unelaborated, lucid, spare and precise.’ Paying homage to the monorhymed cadences of medieval Hebrew poetry in Andalusia, and to the pared-down, understated experiments of first-wave Hebrew modernists (David Fogel, Esther Raab, Rahel), Lea Goldberg’s haunting  last poems are, as Erich Auerbach said of biblical narrative, ‘fraught with  background,’ their taut surface resonating in the rich echo chamber of textual history. With Back’s luminous translations, Goldberg’s masterful ‘whole fragments’ can at long last be appreciated by an English readership.”
—Chana Kronfeld, University of California, Berkeley

“These late poems of Lea Goldberg have been beautifully translated by Rachel Tzvia Back. Goldberg, one of the finest Hebrew poets of the middle decades of the past century, here confronts the imminence of her own death and reflects on poetry, memory, and love with a stark and affecting simplicity. It is a gift to have these poems in English.”
—Robert Alter, Emeritus, University of California, Berkeley


“Lea Goldberg's last work, breaking into a ‘fragmentary’ form reminiscent of Oppen and Jabès, breaks also with other certitudes, claiming sisterhood with Antigone and Hagar, and longing, as Jewish, Muslim, and Christian poets have, for the polyglot and many-voiced exchanges of al-Andalus. Back’s translations and preface lead a reader to the wellspring of this work.”
—Marilyn Hacker

Lea Goldberg (1911-1970) was born in Koenigsberg, East Prussia (today Kaliningrad in Russia) and settled in Tel Aviv in 1935. She was the author of numerous books of poetry in Hebrew, and the recipient of the Israel Prize for poetry, the state’s highest honor. She was a playwright, author of children’s books, literary critic, translator, and founder of the department of comparative literature at the Hebrew University of Jerusalem.

Rachel Tzvia Back is head of the graduate English program at Oranim Academic College, Israel.