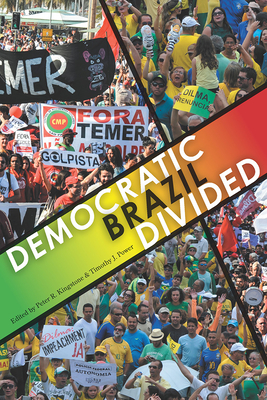 March 2015 should have been a time of celebration for Brazil, as it marked thirty years of democracy, a newfound global prominence, over a decade of rising economic prosperity, and stable party politics under the rule of the widely admired PT (Workers’ Party). Instead, the country descended into protest, economic crisis, impeachment, and deep political division.  Democratic Brazil Divided offers a comprehensive and nuanced portrayal of long-standing problems that contributed to the emergence of crisis and offers insights into the ways Brazilian democracy has performed well, despite the explosion of crisis. The volume, the third in a series from editors Kingstone and Power, brings together noted scholars to assess the state of Brazilian democracy through analysis of key processes and themes. These include party politics, corruption, the new ‘middle classes’, human rights, economic policy-making, the origins of protest, education and accountability, and social and environmental policy. Overall, the essays argue that democratic politics in Brazil form a complex mosaic where improvements stand alongside stagnation and regression.

"As the editors of Democratic Brazil Divided point out, the story of Brazilian democracy has never been as bad as the worst-case scenario suggests, but nor has it ever been as good as the excessively optimistic versions made it appear."
—The Latin American Review of Books


“This is a timely volume that will attract a broad audience from many disciplines especially given the current political and economic crisis in Brazil. The first two volumes in this series (Democratic Brazil and Democratic Brazil Revisited) quickly became standard sources for many scholars in a variety of fields, and I am confident this one will as well.”
—Marshall Eakin, Vanderbilt University

Peter R. Kingstone is professor of politics and development and cofounder of the Department of International Development at King's College London. He is the author of several books, including Crafting Coalitions for Reform: Business Preferences, Political Institutions and Neoliberal Reform in Brazil; ThePolitical Economy of Latin America: Reflections on Neoliberalism and Development; and is coeditor, with Timothy J. Power, of Democratic Brazil: Actors, Institutions and Processes, and Democratic Brazil Revisited.

Timothy J. Power is university lecturer in Brazilian Studies and fellow of St. Antony's College, University of Oxford. A past president of the Brazilian Studies Association, he is the author of The Political Right in Postauthoritarian Brazil.