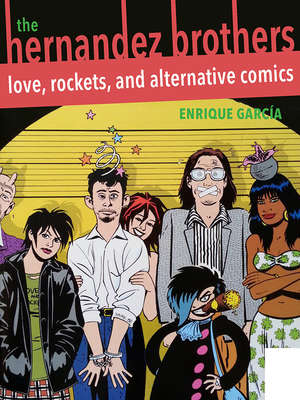 This study offers a critical examination of the work of Gilbert and Jaime Hernandez, Mexican-American brothers whose graphic novels are highly influential. The Hernandez brothers started in the alt-comics scene, where their ‘Love and Rockets’ series quickly gained prominence. They have since published in more mainstream venues but have maintained an outsider status based on their own background and the content of their work. Enrique García argues that the Hernandez brothers have worked to create a new American graphic storytelling that, while still in touch with mainstream genres, provides a transgressive alternative from an aesthetic, gender, and ethnic perspective. The brothers were able to experiment with and modify these genres by taking advantage of the editorial freedom of independent publishing. This freedom also allowed them to explore issues of ethnic and gender identity in transgressive ways. Their depictions of latinidad and sexuality push against the edicts of mainstream Anglophone culture, but they also defy many Latino perceptions of life, politics, and self-representation. The book concludes with an in-depth interview with Jaime and Gilbert Hernandez that touches on and goes beyond the themes explored in the book.

“Enrique García presents a cutting-edge, graphic narrative project that situates the work of the Hernandez Brothers in twentieth and early twenty-first century American print, literary, and popular culture. He contextualizes them in terms of their comic and literary contemporaries, and dynamically summarizes key elements of their storytelling history.”
—William Nericcio, San Diego State University


"Hernandez is an eminently digestible introduction to a body of work that continues to be hugely influential within both Latino cultural production and the world of comics. . . .García skillfully addresses some of the problematic aspects of the fictional universe of the Hernandez brothers, not least the treatment of gender and sexuality. And he deftly handles the ways—sometimes very different ways—that each brother creates comics that both fit within and also interrogate Latino history and culture. The book is a welcome addition to both comics studies and Latino studies." —The Americas


"Garcia’s book on the Hernandez Brothers most obviously walks the line between two writing styles and, potentially, would be the one beloved most equally by both the professorate and serious comic book fans. . . .Garcia is able to appeal equally to informed comics readers, students, and serious scholars alike." —Latin Studies


“A much-needed introductory book to the work of these established Latino comic writers.” —Revista Hispánica Moderna

Enrique García is associate professor of Spanish at Middlebury College. He is the author of Cuban Cinema After the Cold War.
Loading...
or
Not Currently Available for Direct Purchase