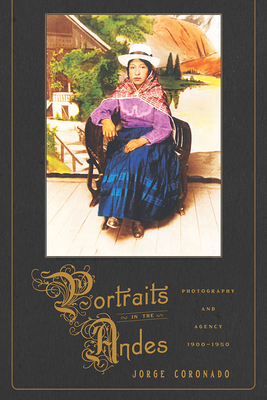 Portraits in the Andes

Portraits in the Andes examines indigenous and mestizo self-representation through the medium of photography from the early to mid twentieth century. As Jorge Coronado reveals, these images offer a powerful counterpoint to the often-slanted, predominant view of indigenismo produced by the intellectual elite.
Photography offered an inexpensive and readily available technology for producing portraits and other images that allowed lower- and middle-class racialized subjects to create their own distinct rhetoric and vision of their culture. The powerful identity-marking vehicle that photography provided to the masses has been overlooked in much of Latin American cultural studies—which have focused primarily on the elite’s visual arts. Coronado's study offers close readings of Andean photographic archives from the early- to mid-twentieth century, to show the development of a consumer culture and the agency of marginalized groups in creating a visual document of their personal interpretations of modernity.

Praise For Portraits in the Andes: Photography and Agency, 1900-1950 (Pitt Illuminations)…

“An extraordinary study of the practices, circulation, and collection of photography among indigenous and mestizo subjects in the southern Andes, Portraits in the Andes  breaks new ground in our understanding of visual regimes and their geopolitical inscription.  Coronado’s detailed investigation into the material life of images in the highlands furthers an alternative genealogy of Andean modernity in the expanded field of visual culture with striking effects for our understanding of the limits of lettered culture and the underside of intellectual history.”
—Julio Ramos, University of California, Berkeley

“Portraits in the Andes asserts that photography, and photographic portraits in particular, offers an important source for understanding the agency of everyday people in the Andes to self-fashion their identity and relationship to modernity.”
—Hispanic American Historical Review

Jorge Coronado is Professor of Latin American literature at Northwestern University. His teaching centers on nineteenth- and twentieth-century literatures and cultures with a focus on the Andes.
Loading...
or support indie stores by buying on