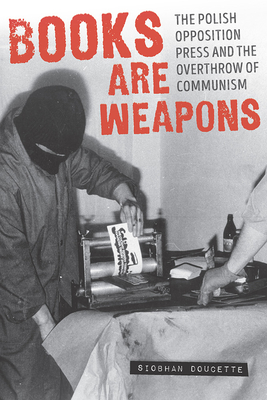 Much attention has been given to the role of intellectual dissidents, labor, and religion in the historic overthrow of communism in Poland during the 1980s. Books Are Weapons presents the first English-language study of that which connected them—the press. Siobhan Doucette provides a comprehensive examination of the Polish opposition’s independent, often underground, press and its crucial role in the events leading to the historic Round Table and popular elections of 1989. While other studies have emphasized the role that the Solidarity movement played in bringing about civil society in 1980-1981, Doucette instead argues that the independent press was the essential binding element in the establishment of a true civil society during the mid- to late-1980s.
Based on a thorough investigation of underground publications and interviews with important activists of the period from 1976-1989, Doucette shows how the independent press, rooted in the long Polish tradition of well-organized resistance to foreign occupation, reshaped this tradition to embrace nonviolent civil resistance while creating a network that evolved from a small group of dissidents into a broad opposition movement with cross-national ties and millions of sympathizers.  It was the galvanizing force in the resistance to communism and the rebuilding of Poland’s democratic society.

Siobhan Doucette is an independent scholar with a PhD in history from Georgetown University.

Praise For Books Are Weapons: The Polish Opposition Press and the Overthrow of Communism (Russian and East European Studies)…

“Doucette paints a vivid picture of Poland at the edge of the 1989 revolution with a strong focus on the circulation of illicit publications, which bypassed state censors. She identifies the most important contributors to the maze of literary dissidence as well as factors that enabled independently written words to penetrate Polish society. This brilliant work deepens our understanding of what may be coined a resurrection of civil society in Poland.”
— Pawel Sowinski, Institute of Political Studies, Polish Academy of Science

“Doucette’s major contribution is to frame a comprehensive history of the underground press in Poland from its origins in the mid-1970s through the Solidarity period, Martial Law, and the underground struggle of 1980s. Previous work has presented this story fragmented by period. Thus, she offers a fresh evolutionary perspective on the question. She has also done a masterful job of building on the English-language literature of the early 1990s and filled in many gaps by a comprehensive reading of the broad Polish-language literature that emerged after 1989. It is truly notable for its scope, ambition, accuracy, and exhaustiveness.”
—Michael Bernhard, University of Florida