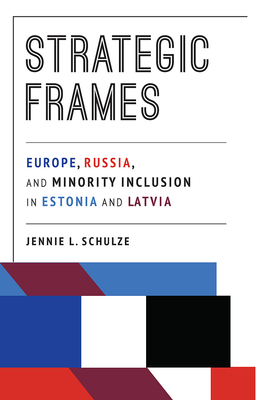 Strategic Frames analyzes minority policies in Estonia and Latvia following their independence from the Soviet Union. It weighs the powerful influence of both Europe and Russia on their policy choices, and how this intersected with the costs and benefits of policy changes for the politicians in each state.

Prior to EU accession, policymakers were slow to adopt minority-friendly policies for ethnic Russians despite mandates from the European Union. These initiatives faced majority opposition, and politicians sought to maintain the status quo and their positions. As Jennie L. Schulze reveals, despite the credit given to the democratizing influence of European institutions, they have rarely produced significant policy changes alone, and then only when domestic constraints were low. Whenever domestic opposition was high, Russian frames were crucial for the passage of reforms. In these cases, Russia’s activism on behalf of Russian speakers reinforced European frames, providing powerful justifications for reform.

Schulze’s attention to both the strategic framing and counter framing of external actors explains the controversies, delays, and suboptimal outcomes surrounding the passage of “conditional” amendments in both cases, as well as the local political climate postaccession.

Strategic Frames offers a significant reference on recent developments in two former Soviet states and the rapidly evolving spheres of political influence in the postindependence era that will serve students, scholars, and policymakers alike.

“Schulze shows how we should consider Estonian and Latvian minority policies within the context of both European and Russian pressures. She provides a corrective to what has been too strong an emphasis on only European Union influences. The book analyzes a wealth of material in the local languages in making the argument, and is an interesting and convincing read.”
—Sherrill Stroschein, University College London

“Drawing on extensive and original research, Schulze provides an in-depth look into the policymaking processes around citizenship, language, and minority inclusion in Estonia and Latvia since the breakup of the Soviet Union. An important contribution to the study of minority politics in the post-Soviet space, Russian kin-state activism, and the impact of European norms and institutions on domestic policies.”
—Myra A. Waterbury, Ohio University

This masterful account applies the current political science theory of framing to the case studies of, broadly speaking, minority legislation in Estonia and Latvia. The result is an impressive scholarly work meant for political scientists of the Baltic States, the lands of the former Soviet Union, and Europe at large.
—The Russian Review

Jennie L. Schulze is assistant professor of political science at Duquesne University.
Loading...
or support indie stores by buying on