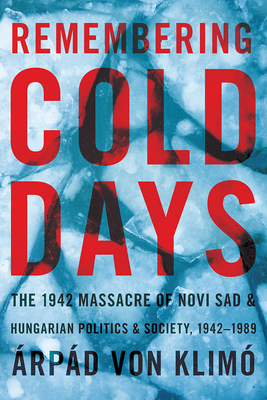 The 1942 Massacre of Novi Sad and Hungarian Politics and Society, 1942-1989 (Russian and East European Studies)

Between three and four thousand civilians, primarily Serbian and Jewish, were murdered in the Novi Sad massacre of 1942. Hungarian soldiers and gendarmes carried out the crime in the city and surrounding areas, in territory Hungary occupied after the German attack on Yugoslavia. The perpetrators believed their acts to be a contribution to a new order in Europe, and as a means to ethnically cleanse the occupied lands.

In marked contrast to other massacres, the Horthy regime investigated the incident and tried and convicted the commanding officers in 1943-44. Other trials would follow. During the 1960s, a novel and film telling the story of the massacre sparked the first public open debate about the Hungarian Holocaust.

This book examines public contentions over the Novi Sad massacre from its inception in 1942 until the final trial in 2011. It demonstrates how attitudes changed over time toward this war crime and the Holocaust through different political regimes and in Hungarian society. The book also views how the larger European context influenced Hungarian debates, and how Yugoslavia dealt with memories of the massacre.

Praise For Remembering Cold Days: The 1942 Massacre of Novi Sad and Hungarian Politics and Society, 1942-1989 (Russian and East European Studies)…

"Árpád von Klimó’s new monograph investigates what happened before and during this massacre, how the atrocity was understood at the time, and how it has been interpreted and remembered in the three-quarters of a century since." —Ferenc Laczó, Slavic Review

Arpad von Klimo is associate professor of history at The Catholic University of America in Washington, DC, and currently serves as president of the Hungarian Studies Association. He has published widely on Italian, German, and Hungarian history in the nineteenth and twentieth centuries.
Loading...
or support indie stores by buying on