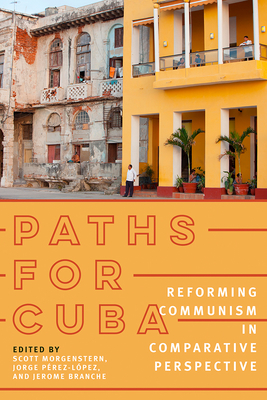 The Cuban model of communism has been an inspiration—from both a positive and negative perspective—for social movements, political leaders, and cultural expressionists around the world. With changes in leadership, the pace of change has accelerated following decades of economic struggles. The death of Fidel Castro and the reduced role of Raúl Castro seem likely to create further changes, though what these changes look like is still unknown. For now, Cuba is opening in important ways. Cubans can establish businesses, travel abroad, access the internet, and make private purchases. Paths for Cuba examines Cuba’s internal reforms and external influences within a comparative framework. The collection includes an interdisciplinary group of scholars from around the world to explore reforms away from communism.

Scott Morgenstern is professor of political science at the University of Pittsburgh. He is also as the director of Pitt’s Center for Latin American Studies.

Jorge Pérez-López is an international economist who has worked in the Office of International Economic Affairs, Bureau of International Labor Affairs, U.S. Department of Labor. He has also worked as director of monitoring at the Fair Labor Association.

Jerome Branche is professor of Latin American literature and cultural studies and Chair of the Department of Hispanic Languages and Literatures, University of Pittsburgh.

“The history of the Cuban revolution is a history of change–of change begetting change.  It is a rare accomplishment indeed that the scholarship on the revolution succeeds in ‘catching up’ to the process of change in Cuba.  Paths for Cuba has achieved this success.  And as important, it provides the larger context in which to render twenty-first century change in Cuba comprehensible.”
—Louis A. Pérez, Jr., University of North Carolina

“To imagine what a new Cuba might eventually look like, the contributors to this thoughtful collection examine the factors that have driven change in other one-party authoritarian systems.” —Foreign Affairs