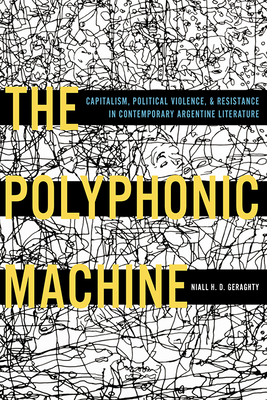 Focusing on the work of the Argentine authors César Aira, Marcelo Cohen, and Ricardo Piglia, The Polyphonic Machine conducts a close analysis of the interrelations between capitalism and political violence in late twentieth-century Argentina. Taking a long historical view, the book considers the most recent Argentine dictatorship of 1976–1983 together with its antecedents and its after-effects, exploring the transformations in power relations and conceptions of resistance which accompanied the political developments experienced throughout this period. By tracing allusive fragments of Argentine political history and drawing on a range of literary and theoretical sources Geraghty proposes that Aira, Cohen and Piglia propound a common analysis of Argentine politics during the twentieth century and construct a synergetic philosophical critique of capitalism and political violence. The book thus constitutes a radical reappraisal of three of the most important authors in contemporary Argentine literature and contributes to the philosophical and historical understanding of the most recent Argentine military government and their systematic plan of state terrorism.

Niall H.D. Geraghty is a Leverhulme Early Career Fellow at the Institute of Latin American Studies, School of Advanced Study, University of London.

“In this meticulously researched and lucidly argued work, Niall Geraghty explores the work of three of the most important novelists of the post-dictatorship period in Argentina. Balancing insightful textual analysis with detailed philosophical exposition, The Polyphonic Machine is essential reading for any student or scholar interested in the shifting landscapes of literature and power in Latin America.”
—Edward King, University of Bristol

“‘How does literature function in society?’” is the ambitious challenge confronted by Niall Geraghty with ostensible focus on, but reaching well beyond, the writings of César Aira, Marcelo Cohen, and Ricardo Piglia. Evidencing alertness to the particular debates and discourses arising from the terror, overt or disguised, of dictatorship and post-dictatorship Argentina, The Polyphonic Machine reveals how viable critical theories are produced, instrumentally, though the very act of writing fiction. It analyzes persuasively as ‘co-implicated and complementary literary projects often deemed irreconcilable yet inviting a shared immanent critique of the beyond words’ criminality of Dirty War and neo-liberal totalitarianisms.”
—Bernard McGuirk, Nottingham University