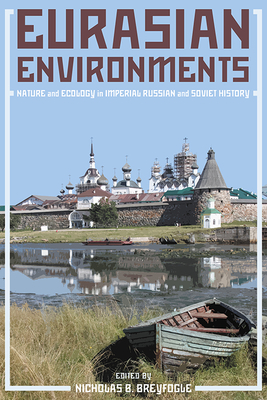 Through a series of essays, Eurasian Environments prompts us to rethink our understanding of tsarist and Soviet history by placing the human experience within the larger environmental context of flora, fauna, geology, and climate. This book is a broad look at the environmental history of Eurasia, specifically examining steppe environments, hydraulic engineering, soil and forestry, water pollution, fishing, and the interaction of the environment and disease vectors. Throughout, the authors place the history of Imperial Russia and the Soviet Union in a trans-chronological, comparative context, seamlessly linking the local and the global. The chapters are rooted in the ecological and geological specificities of place and community while unveiling the broad patterns of human-nature relationships across the planet. Eurasian Environments brings together an international group scholars working on issues of tsarist/Soviet environmental history in an effort to showcase the wave of fascinating and field-changing research currently being written.

Nicholas B. Breyfogle is an associate professor of history at The Ohio State University. He is the author of Heretics and Colonizers: Forging Russia's Empire in the South Caucasus (Cornell University Press, 2005), and he is currently completing the book, “Baikal: the Great Lake and its People.” He is also co-editor of Peopling the Russian Periphery: Borderland Colonization in Eurasian History (Routledge, 2007) and guest co-editor of Technology[B , Ecology, and Human Health Since 1850, a thematic Forum in Environmental History (2015). Since 2007, Breyfogle has worked as co-editor of the online magazine Origins: Current Events in Historical Perspective.

“This innovative collection explores the specific varieties and unifying themes of three centuries of Imperial Russian and Soviet environmental history. By examining political, economic, and cultural experiences in the multiple limiting contexts of climate, flora and fauna, it offers fascinating insights into major themes in Russian and Soviet history, including empire-building, socialist construction, industrialization, relations between dominant and sub-altern groups, and more. Authored by an international cast of leading scholars, it functions both as an introduction to the field and a general overview of the latest research.”
—Brian Bonhomme, Youngstown State University


"Whereas many earlier studies of the Soviet environment focused on national-level policies and decision-making emanating from Moscow or the capitals of the Soviet republics, the cases presented in this volume bring to light how societies were transformed and affected in their interactions with the natural environment. Many of the essays underscore the tension between imperial goals and the environmental realities faced by the different populations."
—Erika Weinthal, Russian Review