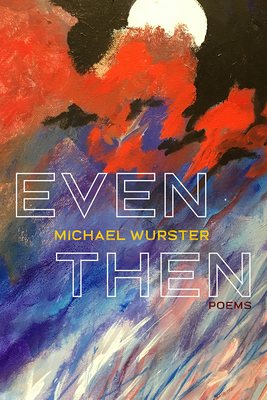 A new collection of poetry from a founding member of the Pittsburgh Poetry Exchange.

Praise For Even Then: Poems (Pitt Poetry Series)…

“It’s been said that W.S. Merwin invented a new poetic idiom. Thus, American poetry took its bold, new direction. The same is true of Michael Wurster who, while surveying the passing of history for over five decades, has pared-down his poet’s language until everything is burned away except the essential truth.” —James Deahl

“Michael Wurster’s poetry collection, Even Then, highlights his minimalist style, but the art within each piece is maximal. Love and death are strikingly represented in “Love Is a Gypsy” and “In a Gray Coat.”  Besides those poems, there are about 77 more to be savored. Even Then is about continuity: of how what happened ‘even then’ continues even now, unto infinity.” —Rosemary Cappello

“Is it possible to be a dazzling eastern European poet impersonating an American born and bred poet? Is it possible to live in both the day-to-day world of old Pittsburgh characters and streets, as well as in a secret surreal place where doors open into the sky? The answer is a double yes as Michael Wurster proves again and again in this marvelous, imaginative, and joyful collection.” —Mike James, author of Crows in the Jukebox

"This isn’t a book of poems; it’s a living thing where people walk in and out of its paper; where we go on a magical tour of impressions; and where a poet says exactly the right amount of words, exactly as needed, to take us by surprise."—Grace Cavalieri, Washington Independent Review of Books

"We are taken on a journey of moments – some sublime, some surreal – that comprise a life in which observation engenders revelation. These are works that are meant to be enjoyed for what they show, instead of what they tell." —Stuart Sheppard, Pittsburgh Post-Gazette

“Michael Wurster has been a creative force for many decades. . . .The poems in his fourth collection, Even Then, exhibit the virtuosity of that long experience—they elude categorization. Likewise, his reflections on the nature of poetry and the imagination, and his casual references to literary compatriots imply a scholarly history. Yet, at the same time, Wurster is as inventive, ironic, and witty as a newer voice.” —The Main Street Rag

Michael Wurster is the author of numerous poetry books and is a founding member of Pittsburgh Poetry Exchange. For 17 years, he taught at Pittsburgh Center for the Arts School. He is co-editor, with Judith R. Robinson, of the anthology, Along These Rivers: Poetry & Photography from Pittsburgh (Quadrant Press, 2008), and The Brentwood Anthology (Lummox Press, 2014). In 1996, Wurster was an inaugural recipient of a Pittsburgh Magazine Harry Schwalb Excellence in the Arts Award for his contributions to poetry and the community.