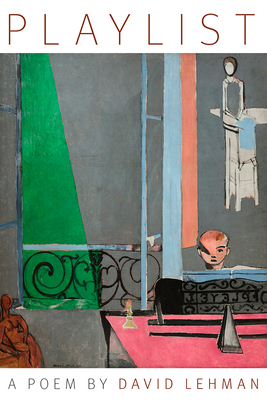 “What a gorgeous and ambitious poem this is—an elegy, a calendar, an enactment of beauty, a tribute to singers and musicians and those who love them, a musical compilation, a meditation on friendship and art, an evocation of hopefulness and the possibility of enhanced life,  a summoning . . .” —Lee Upton


“Playlist is entirely wonderful. I'd meant just to take a quick glance and then to read it through with my afternoon tea.  But once I began, I could not put it down . . . that hasn't happened to me since the passing of Schuyler. Really, it's splendid.” —Donald Revell

“. . .  As full of light as of music. A prodigious display of musical erudition, offered to the reader with playfulness rather than pretension.” —Terence Winch


“Playlist is a testament to a literary friendship of the highest caliber, and an artifact from a life lived in a studied circadian dialogue with art, literature, and music. Anyone who lives poetry, and loves it, should read this book.” —Best American Poetry

David Lehman is the editor of The Oxford Book of American Poetry and Great American Prose Poems. He is also the general editor of the annual The Best American Poetry, which he initiated in 1988. His recent books of poetry include Poems in the Manner Of and New and Selected Poems. He has authored eight nonfiction books, including The State of the Art: A Chronicle of American Poetry, 1988-2014. Lehman has received a Guggenheim Fellowship and an award in literature from the American Academy of Arts and Letters.