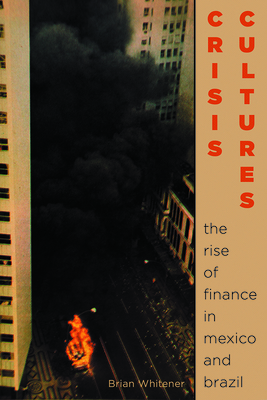 The Rise of Finance in Mexico and Brazil (Pitt Illuminations)

Drawing on a mix of political, economic, literary, and filmic texts, Crisis Cultures challenges current cultural histories of the neoliberal period by arguing that financialization, and not just neoliberalism, has been at the center of the dramatic transformations in Latin American societies in the last thirty years. Starting from political economic figures such as crisis, hyperinflation, credit, and circulation and exemplary cultural texts, Whitener traces the interactions between culture, finance, surplus populations, and racialized state violence after 1982 in Mexico and Brazil. Crisis Cultures makes sense of the emergence of new forms of exploitation and terrifying police and militarized violence by tracking the cultural and discursive forms, including real abstraction and the favela and immaterial cadavers and voided collectivities, that have emerged in the complicated aftermath of the long downturn and global turn to finance.


Praise For Crisis Cultures: The Rise of Finance in Mexico and Brazil (Pitt Illuminations)…

“Riveting and timely, Whitener offers a bold path forward for scholars, students, and members of the public stunned by Brazil and Mexico’s descent into profound crisis, torn by exploding state violence, narco-criminalization, social militarization, economic crash, and political alienation. Distinct from other authors who analyze the global economic origins of crisis, Whitener generates a captivating and convincing vision of the role of culture and subject formation in creating a new set of feelings, perceptions, and imaginaries that undergird this age of banking, credit, and debt instruments.” —Paul Amar, University of California-Santa Barbara

“Whitener’s work is outstanding. He brings to the table an archive that is not very well known in Latin American cultural and literary studies circles. Specifically novel is his command of regionally specific Mexican and Brazilian economic discourse. Whitener’s particular way of weaving together economic discourse, theoretical concepts, and historical context in order to read some of the better known Mexican and Brazilian cultural texts produces original interpretations that challenge some of the key concepts in the field.” —Alessandro Fornazzari, University of California, Riverside

Brian Whitener is an assistant professor in the Department of Modern and Classical Languages and Literatures at the University of South Alabama.