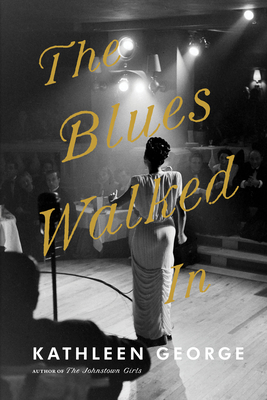 The Blues Walked In

In 1936, life on the road means sleeping on the bus or in hotels for blacks only. After finishing her tour with Nobel Sissel’s orchestra, nineteen-year-old Lena Horne is walking the last few blocks to her father’s hotel in Pittsburgh’s Hill District. She stops at a lemonade stand and meets a Lebanese American girl, Marie David. Marie loves movies and adores Lena, and their chance meeting sparks a relationship that will intertwine their lives forever. Lena also meets Josiah Conner, a charismatic teenager who helps out at her father Teddy’s hotel. Josiah often skips school, dreams of being a Hollywood director, and has a crush on Lena. Although the three are linked by a determination to be somebody, issues of race, class, family, and education threaten to disrupt their lives and the bonds between them.

Lena’s father wants her to settle down and give up show business, but she’s entranced by the music and culture of the Hill. It’s a mecca for jazz singers and musicians, and nightspots like the Crawford Grill attract crowds of blacks and whites. Lena table-hops with local jazzmen as her father chaperones her through the clubs where she‘ll later perform. Singing makes her feel alive, and to her father’s dismay, reviewers can’t get enough of her. Duke Ellington adores her, Billy Strayhorn can’t wait to meet her, and she becomes “all the rage” in clubs and Hollywood for her beauty and almost-whiteness. Her signature version of “Stormy Weather” makes her a legend. But after sitting around for years at MGM as the studio heads try to figure out what to do with her, she isn’t quite sure what she’s worth.

Marie and Josiah follow Lena’s career in Hollywood and New York through movie magazines and the Pittsburgh Courier. Years pass until their lives are brought together again when Josiah is arrested for the murder of a white man. Marie and Lena decide they must get Josiah out of prison—whatever the personal cost.

Praise For The Blues Walked In…

“Edgar-finalist George successfully moves to period fiction with this evocative, historically themed whodunit, set in 1989, as the great Johnstown, Pennsylvania, flood approaches its centennial. George offers complex and rewarding storytelling that pays tribute to not only the magnitude of the disastrous flood but also the resilience of Johnstown and its citizens.” —Publishers Weekly

"A story with characters that feel so real that it’s sometimes hard to remember the book is a work of fiction. This is further compounded by the vivid descriptions of the flood that correspond with historical accounts and the fact that the story is set in very real locations. A colorful account of one of the most traumatic moments in Pennsylvania’s history and the lives it changed." —Pittsburgh Post-Gazette


"Through the work of playwright August Wilson, photographer Charles “Teenie” Harris and the jazz greats who played at the Crawford Grill, Pittsburgh’s Hill District has become famous. The golden age of this community is where Kathleen George begins her very entertaining new novel, The Blues Walked In, and at the start she bathes both story and neighborhood in a gossamer glow of nostalgia." —Margie Romero, The Pittsburgh Post-Gazette

Kathleen George is the author of The Johnstown Girls, a novel about the famous Johnstown flood. She has also written seven mysteries set in Pittsburgh: A Measure of Blood, Simple, The Odds, which was nominated for the Edgar® Award from the Mystery Writers of America, Hideout, Afterimage, Fallen, and Taken. George is also the author of the short story collection The Man in the Buick and editor of another collection, Pittsburgh Noir. She is a professor of theater arts and creative writing at the University of Pittsburgh.
Loading...
or
Not Currently Available for Direct Purchase