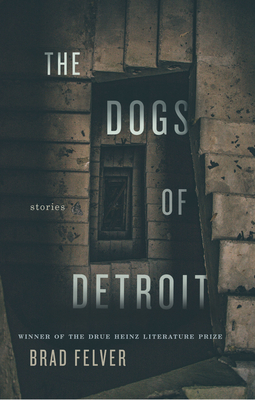 The Dogs of Detroit

The 14 stories of The Dogs of Detroit each focus on grief and its many strange permutations. This grief alternately devolves into violence, silence, solitude, and utter isolation. In some cases, grief drives the stories as a strong, reactionary force, and yet in other stories, that grief evolves quietly over long stretches of time. Many of the stories also use grief as a prism to explore the beguiling bonds within families. The stories span a variety of geographies, both urban and rural, often considering collisions between the two.

“Felver can be inventive with tone, diction and perspective — and heartbreakingly solemn when he wants to be. Both ‘The Era of Good Feelings,’ in which a high-school history teacher, burying his father, appraises his personal past, and ‘Hide-and-Seek,’ in which estranged brothers collide at an airport bar, coolly dissect woe amid death and regret.” —The New York Times Book Review


“Felver's writing is sharp and insightful. His stories evoke the style and themes of writers ranging from Richard Russo to Rick Bass to Andre Dubus III and, in the particularly brutal surrealist title story, ‘The Dogs of Detroit,’ Cormac McCarthy. A substantial debut by a promising and confident new writer.” —Kirkus Reviews


“Felver lays his words down in these stories in such a precise way that it’s difficult, if not impossible, to pull yourself away from a story once you’ve started.” —Carmeron Barnett, The Pittsburgh Post-Gazette


"In this accomplished debut, Felver delivers a powerful, haunting sense of life’s hard contours in clear-eyed language that never stoops to gratuitous violence or self-­conscious drama. ‘We were mean kids. We knew it and celebrated it,’ says one story, while another effectively encompasses a couple’s dating to post-divorce relationship in under 25 pages." —Library Journal


"Felver has created a dark mirror for readers to gaze into." —New York Journal of Books


“The Dogs of Detroit is animated by a tough-minded vision of strife and frustration, beneath which runs a streak of compassion for its bereft, often violent characters. With consummate skill and assurance, Brad Felver writes of overlooked people suffering physical and emotional deprivation, who struggle, now and again with success, in thwarted lives. Ambivalence colors the deepest relationships, with love and hate resembling an ever shifting hologram.” —Lynn Sharon Schwartz


“Brad Felver’s The Dogs of Detroit is a terrific debut, the sad, unforgiving world of a writer who knows how to use his dark devices to tell intense, high-stakes stories.” —Story366

Brad Felver is a fiction writer, essayist, and teacher of writing. His fiction has appeared widely in magazines such as One Story, Colorado Review, and Midwestern Gothic. His essays have appeared in New England Review, Hunger Mountain, BULL: Men’s Fiction, and Fiction Writer’s Review among other places. His awards include a Pushcart Prize Special Mention , the Zone 3 Fiction Prize, and most recently the 2018 Drue Heinz Literature Prize. The Dogs of Detroit is his first story collection. He lives with his wife and kids in northern Ohio.
Loading...
or
Not Currently Available for Direct Purchase