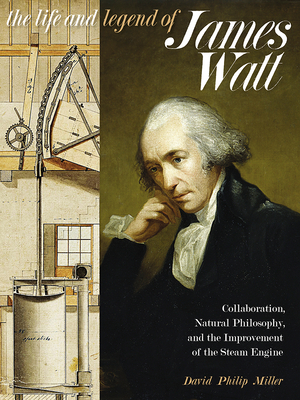 The Life and Legend of James Watt

Collaboration, Natural Philosophy, and the Improvement of the Steam Engine (Sci & Culture in the Nineteenth Century)

The Life and Legend of James Wattoffers a deeper understanding of the work and character of the great eighteenth-century engineer. Stripping away layers of legend built over generations, David Philip Miller finds behind the heroic engineer a conflicted man often diffident about his achievements but also ruthless in protecting his inventions and ideas, and determined in pursuit of money and fame. A skilled and creative engineer, Watt was also a compulsive experimentalist drawn to natural philosophical inquiry, and a chemistry of heat underlay much of his work, including his steam engineering. But Watt pursued the business of natural philosophy in a way characteristic of his roots in the Scottish “improving” tradition that was in tension with Enlightenment sensibilities. As Miller demonstrates, Watt’s accomplishments relied heavily on collaborations, not always acknowledged, with business partners, employees, philosophical friends, and, not least, his wives, children, and wider family. The legend created in his later years and “afterlife” claimed too much of nineteenth-century technology for Watt, but that legend was, and remains, a powerful cultural force.


Praise For The Life and Legend of James Watt: Collaboration, Natural Philosophy, and the Improvement of the Steam Engine (Sci & Culture in the Nineteenth Century)…

“David Philip Miller has written the most authoritative study of James Watt for a generation, one combining thorough research, lucid presentation, and an impressive mastery of biographical, technical, and scientific issues. Watt emerges as far more than the inventor of an improved steam engine: Miller presents him as an endlessly obsessive analyst and improver, a model of pragmatism, a shrewd businessman who used politics to further his commercial aims, and a natural philosopher of impressive range. The clarity of Miller's writing and arguments makes reading this book a pleasure.” —Trevor Levere, University of Toronto


“In this outstanding work, Miller excels in his understanding of the making of the myth of Watt, and of the significance of ‘Team Watt’ presenting this Scottish improver as an individualist inventor whose success relied upon natural philosophical credentials. His sophisticated distillation of Watt’s chemistry sheds new light on the origins of the steam engine. This is a tremendous achievement.” —Ben Marsden, author of Watt’s Perfect Engine: Steam and the Age of Invention


“Miller’s coverage of underdeveloped topics, his insights into Watt’s personality, his solid scholarship, and his excellent prose fully justify this biography.” —Choice


“Miller’s deeply researched and consistently readable book advances the genre of scientific biography into new territory. It is a fine achievement.” —Annals of Science


“A reassessment of James Watt has been under way for at least two decades and it culminates with this book published in the bicentennial year of the steam engineer’s death. . . . By retracing the nineteenth- and twentieth century iconography of the Great Steamer, Miller is able to pursue the ‘afterlife’ story virtually to the present day.” —Midland History


“Any worries about the 2019 bicentenary have been comprehensively rescued by the appearance of this fine tribute to Watt’s life and legend. . . . Its 420 pages give full and fascinating insights into Watt’s career, legend, and legacy. . . . This book deserves great success, as it tells a remarkable story very well. . . . We have a lot to ponder as a result of Miller’s most welcome new book.” —Isis

David Philip Miller is emeritus professor of history of science at the University of New South Wales, Sydney. He is a fellow of the Australian Academy of Humanities and a member of the International Academy of the History of Science.