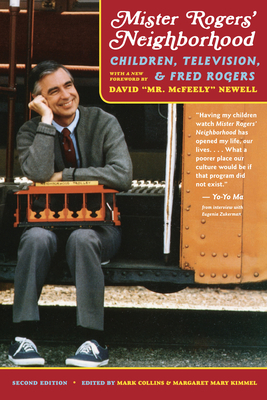 Updated edition featuring a new foreword by David "Mr. McFeely" Newell.The pieces in this volume address the enduring influence and importance of Fred Roger's work in children's television. The contributors, representing a wide range of disciplines--art, psychology, medicine, social criticism, theology, music, and communications--include David Bianculli, Lynette Friedrick Cofer, Nancy E. Curry, Ellen Galinsky, Geroge Gerbner, William Guy, Lynn Johnson, Jeanne Marie Laskas, Susan Linn, Mary Rawson, Mark Shelton, Reoderick Townley, Paula Lawrence Wehmiller, and Eugenia Zukerman interviewing Yo-Yo Ma. Born in 1928 in Latrobe, Pennsylvania, Fred Rogers began his television career in 1951 at NBC. In 1954, he became program director for the newly founded WQED-TV in Pittsburgh, the first community-supported television station in the United States. From 1954 to 1961, Rogers and Josie Carey produced and performed in WQED's The Children's Corner, which became part of the the Saturday morning lineup on NBC in 1955 and 1956.It was after Fred Rogers was ordained as a Presbyterian minister in 1963, with a special charge of serving children and their families through television, that he developed what became the award-winning PBS series Mister Rogers' Neighborhood.

"For more than forty years, Fred Rogers has been telling children and the reust of us that he likes us just the way we are. No one in our lives gives us that message. Now, in MISTER ROGERS' NEIGHBORHOOD, fifteen essayists show how deeply, and in how many ways, the message has registered."--Susan Stamberg, National Public Radio

"This is a wonderful book. Fred Rogers has made a profound and historic contribution to the quality of children's programming. This book is a great tribute to him and his life's work, one that will be treasured by all those who work in children's educational television."--Alvin F. Poussaint, Harvard Medical School

"Fred Rogers is a national treasure and the writers of these essays go a long way toward explaining why. They have provided an invaluable book for all who are contemplating doing serious work for children through television and film."--Joan Ganz Cooney, Children's Television Workshop

"For decades, Fred Rogers's neighborhood has been a beloved place for children on public television--and a safe constructive place. This book confirms the power and relevance of Mr. Roger's pioneering work. It inspires gratitude for what he has done in the past, and hope that in the future other will follow his example."--Ervin S. Duggan, Public Broadcasting Service

Mark Collins served as the first lecturer and coordinator for the Environmental Studies Program in the Department of Geology and Environmental Science at the University of Pittsburgh. He is the author of several books, including Wayward Tracks (In Extenso Press/ACTA Publications).

The late Margaret Mary Kimmel was professor in the Department of Library Science at the University of Pittsburgh. She co-authored For Reading Out Loud: A Guide to Sharing Books with Children and was a consultant to Family Communications and Fred Rogers.

David Newell (Foreword) is an American television actor known primarily for his portrayal of Mr. McFeely, the delivery man on Mister Rogers' Neighborhood, and worked in the public relations department of the Fred Rogers Company. His character's most famous catchphrase was "Speedy Delivery!" He toured the country until he retired in 2015, promoting Mister Rogers' Neighborhood as Mr. McFeely.