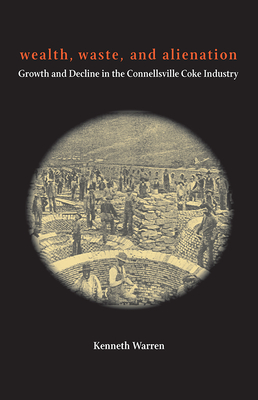 Growth and Decline in the Connellsville Coke Industry

The southwestern Pennsylvania town of Connellsville lay in the middle of a massive reserve of high quality coal. Connellsville coal was so soft and easily worked that one man and a boy could cut and load ten tons of it in ten hours.

This region became a major source of coke, a vital material in industrial processes, above all in steel manufacture, producing forty-seven percent of America`s supply in 1913. But by the 1920s, what had seemed to be a gold mine was turning into a devastating economic, environmental and social loss.

In Wealth, Waste and Alienation, Kenneth Warren draws from primary source material, including the minutes and letters of the Carnegie Steel Company, the United States Steel Corporation, and the archives of Henry Clay Frick, to explain the birth, phenomenal growth, decline and death of the Connellsville coke industry.  Its rich natural resources produced wealth for individuals, companies, and some communities, but as Warren shows, there was also social alienation, waste, and devastation of the natural environment. The complicated structure of enterprise, capital, and labor which made this region flourish unwound almost as quickly as it arose, creating repercussions that are still reverberating in what’s left of Connellsville today, a kind of postindustrial rural shell of its former productive glory.


Praise For Wealth, Waste, and Alienation: Growth and Decline in the Connellsville Coke Industry…

"A superb monograph delivering precisely what the title promises--a detailed study of what he rightly calls 'one of the nation's greatest ad most distinctive mineral-based economies'...a pleasure and an education to read."--Business Insider

Ken Warren was born in Lincoln. After studying at the University of Cambridge and for a year in the University of Wisconsin, he taught in turn at the universities of Leicester, Newcastle upon Tyne and Oxford. He has researched and published extensively in the fields of economic geography and business history, mainly in relation to the United Kingdom and the United States. In recent years he has concentrated on the United States (studies of the United States Steel Corporation, Bethlehem Steel Corporation and the Connellsville coking coal district) and north east England (with books on various aspects of Armstrong Whitworth and Palmers of Jarrow).
Loading...
or support indie stores by buying on