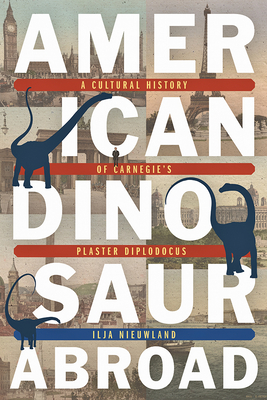 
"Diplodocus is a Jurassic icon, one of the largest and most impressive dinosaurs ever uncovered. But it is not just that. In this detailed, thoughtful exploration, Ilja Nieuwland follows the changing cultural significance of this famous dinosaur in its role as ambassador, celebrity, and scientific catalyst, revealing how a single, spectacular skeleton can spur broader changes in the process of science and appreciation for nature. Read this book and you'll never look at old bones the same way again." —Brian Switek, author of My Beloved Brontosaurus and Skeleton Keys


“The story of Diplodocus is supposed to be familiar. But as revealed here by paleontological historian Ilja Nieuwland, the true story is more complex, nuanced, and interesting. His book is a crucial contribution to the sparse literature on historical paleontology and includes a vast amount of detail not previously covered elsewhere.” —Darren Naish, coauthor of Dinosaurs: How They Lived and Evolved


“Ilja Nieuwland has written a thoroughly researched and engaging account of the history of Diplodocus carnegii. American Dinosaur Abroad offers fascinating insight into the workings of international and national science in the early twentieth century and the growth of the iconic popularity of dinosaurs. A landmark work in the history of paleontology.” —Chris Manias, King’s College London


"The book is a story of science and history, but it's also a close reading of how fossils and their replicas become tools of capitalism, power, and privilege. And it's a story that Nieuwland tells particularly well. . . . American Dinosaur Abroad offers a well-researched example of how paleontological patronage ensured the scientific, social, and commercial success of a dinosaur. It's also a fascinating window into the idiosyncratic hubris of one of America's most consequential barons." —Pacific Standard