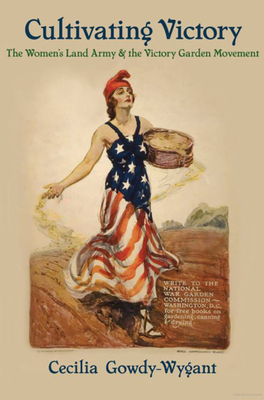 The Women's Land Army and the Victory Garden Movement

During the First and Second World Wars, food shortages reached critical levels in the Allied nations. The situation in England, which relied heavily on imports and faced German naval blockades, was particularly dire. Government campaigns were introduced in both Britain and the United States to recruit individuals to work on rural farms and to raise gardens in urban areas. These recruits were primarily women, who readily volunteered in what came to be known as Women’s Land Armies. Stirred by national propaganda campaigns and a sense of adventure, these women, eager to help in any way possible, worked tirelessly to help their nations grow “victory gardens” to win the war against hunger and fascism. In vacant lots, parks, backyards, between row houses, in flowerboxes, and on farms, groups of primarily urban, middle-class women cultivated vegetables along with a sense of personal pride and achievement.

In Cultivating Victory, Cecilia Gowdy-Wygant presents a compelling study of the sea change brought about in politics, society, and gender roles by these wartime campaigns. As she demonstrates, the seeds of this transformation were sown years before the First World War by women suffragists and international women’s organizations. Gowdy-Wygant profiles the foundational organizations and significant individuals in Britain and America, such as Lady Gertrude Denman and Harriet Stanton Blatch, who directed the Women’s Land Armies and fought to leverage the wartime efforts of women to eventually win voting rights and garner new positions in the workforce and politics.

In her original transnational history, Gowdy-Wygant compares and contrasts the outcomes of war in both nations as seen through changing gender roles and women’s ties to labor, agriculture, the home, and the environment. She sheds new light on the cultural legacies left by the Women’s Land Armies and their major role in shaping national and personal identities.

Praise For Cultivating Victory: The Women's Land Army and the Victory Garden Movement…

“What separates [‘Cultivating Victory’] from other texts . . . is Gowdy-Wygant’s focus on scope. This proves to be one of the strengths of ‘Cultivating Victory’. . . . A second strength is the substantially researched details about not only the policies and propaganda that both the U.S. and British governments employed to involve women in the war efforts but, perhaps more importantly, the attention that is drawn to the vital women behind and in front of British and U.S. campaigns for war support. . . . Valuable and fills a neglected aspect of war, gender, and politics. A final and significant strength is the extensive research on pop-culture elements and propaganda of the WLA and Victory Garden movements.”—Journal of American Culture

“Cecilia Gowdy-Wygant offers an original look at the back and forth conversations between the women (and the governments) of Britain and the United States as they defined urban women’s responsibilities in securing food production during the First and Second World Wars. Exhaustively researched, with an engaging set of illustrations from the period, Cultivating Victory convincingly lays out the shift from growing roses in support of home to growing tomatoes in support of troops, leading in the process to a more complex understanding of the relationships among nationalism, internationalism, food production, and women’s roles in all these arenas during the twentieth century.”
—Vera Norwood, University of New Mexico, emeritus

"Although the institutional histories of both the WLAs and the victory garden movements in Britain and America are reasonably well-known, the approach of this book, combining a comparative national analysis with insights into the interconnectedness of environmental, food, gender and cultural history, does offer a new perspective on women and war in the twentieth century."
--Environment and History

“Gowdy-Wygant’s ambitious goal is to cover a trans-Atlantic feminist history of rural gardening during two world wars, along with some individual collective legacies . . . she argues that individual women’s patriotic desire to promote victory via agricultural labor ended up transforming them: not only in a material sense but also more broadly, in terms of personal resilience.”
—L’Homme: European Journal of Feminist History