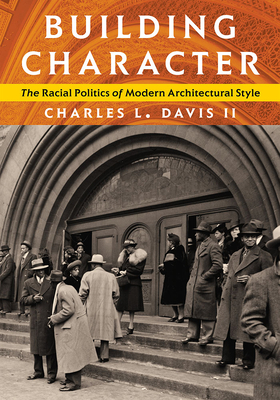 In the nineteenth-century paradigm of architectural organicism, the notion that buildings possessed character provided architects with a lens for relating the buildings they designed to the populations they served. Advances in scientific race theory enabled designers to think of “race” and “style” as manifestations of natural law: just as biological processes seemed to inherently regulate the racial characters that made humans a perfect fit for their geographical contexts, architectural characters became a rational product of design. Parallels between racial and architectural characters provided a rationalist model of design that fashioned some of the most influential national building styles of the past, from the pioneering concepts of French structural rationalism and German tectonic theory to the nationalist associations of the Chicago Style, the Prairie Style, and the International Style. In Building Character, Charles Davis traces the racial charge of the architectural writings of five modern theorists—Eugene Emmanuel Viollet-le-Duc, Gottfried Semper, Louis Sullivan, Frank Lloyd Wright, and William Lescaze—to highlight the social, political, and historical significance of the spatial, structural, and ornamental elements of modern architectural styles.

“Building Character . . . provides a revisionist history that recovers the ways that architectural organicism provided a rationalist model of design to consciously relate the perceived racial and architectural ‘characters’ of a nation to the people they served. By examining the ethnographic histories of figures important to architecture including Wright, Eugène Emmanuel Viollet-le-Duc, Gottfried Semper, and William Lescaze, Davis revises the Western canon to account for the role of racial ideas.” —Architect Magazine

“Beautifully argued, elegantly written, and extremely provocative . . . based on wide reading, careful archival research, and a great deal of reflection well outside of the ordinary contours of architectural history. . . . it should be used as an exemplar, one that could open up discussions about more recent architectural discourses and historical approaches—not to mention pedagogy.” —The Plan Journal

“By investigating how race shapes historical meaning and cultural associations of architectural forms, systems, and discourses, Davis makes an outstanding contribution to current debates in architectural history and theory. This book is a groundbreaking effort, an incomparable study.” —Mabel O. Wilson, Columbia University

“In this much-needed book, Charles Davis situates discourses of race and nationalism within the context of architectural history and historiography, bringing visibility to race and its impacts on architectural style and building typology. Building Character is an innovative and compelling exploration of the race concept as a fundamental issue within the study of modern architecture.” —Milton S. F. Curry, University of Southern California