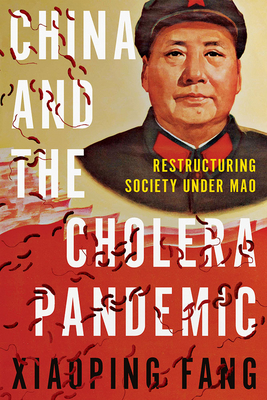 China and the Cholera Pandemic

Mao Zedong’s Great Leap Forward campaign organized millions of Chinese peasants into communes in a misguided attempt to rapidly collectivize agriculture with disastrous effects. Catastrophic famine lingered as the global cholera pandemic of the early 1960s spread rampantly through the infected waters of southeastern coastal China. Confronted with a political crisis and the seventh global cholera pandemic in recorded history, the communist government committed to social restructuring in order to affirm its legitimacy and prevent transmission of the disease. Focusing on the Wenzhou Prefecture in Zhejiang Province, the area most seriously stricken by cholera at the time, Xiaoping Fang demonstrates how China’s pandemic was far more than a health incident; it became a significant social and political influence during a dramatic transition for the People’s Republic.

China and the Cholera Pandemic reveals how disease control and prevention, executed through the government’s large-scale, clandestine anticholera campaign, were integral components of its restructuring initiatives, aimed at restoring social order. The subsequent rise of an emergency disciplinary health state furthered these aims through quarantine and isolation, which profoundly impacted the social epidemiology of the region, dividing Chinese society and reinforcing hierarchies according to place, gender, and socioeconomic status.


Praise For China and the Cholera Pandemic: Restructuring Society under Mao…

"Through meticulous archival research, including valuable material no longer accessible to the public, and interviews with survivors, Xiaoping Fang has produced a fine-grained study on the cholera epidemic in southeast China in the early 1960s. His lucid account shows how the government’s efforts to manage this disease deepened social divisions and created control and surveillance mechanisms that continue to mold the lives of people in China today—particularly during outbreaks of epidemic disease.” —Hilary A. Smith, author of Forgotten Disease: Illnesses Transformed in Chinese Medicine

"Xiaoping Fang's timely book brings to light an important narrative in the history of public health in the People’s Republic of China for the first time, using an approach that makes the 1962 El Tor cholera outbreak highly relevant for contemporary discussions about medicine, security, and state power in academia and in the public sphere. It represents groundbreaking work to open up new areas of inquiry in PRC history and in the history of epidemiology." —Mary Augusta Brazelton, author of Mass Vaccination: Citizens' Bodies and State Power in Modern China


“Fang’s book tells an important story that . . . deserves to be read widely. . . . Historians of modern medicine and public health in East Asia as well as historians of Maoist China will find this book exciting and worthwhile. . . . China and the Cholera Pandemic will certainly become an important book in the ‘core curriculum’ of the history of medicine in modern China, and [Fang] is to be lauded for this accomplishment.” —Developing Economies

Xiaoping Fang is assistant professor of history at the School of Humanities of the Nanyang Technological University, Singapore. His research interests focus on the history of medicine, health, and disease in twentieth-century China and the socio-political history of Mao’s China after 1949.
Loading...
or
Not Currently Available for Direct Purchase