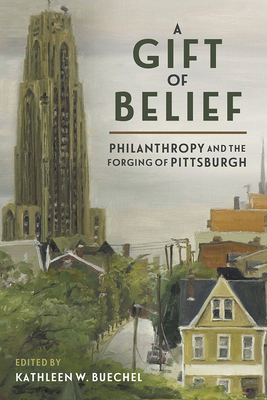 A Gift of Belief

Philanthropy and the Forging of Pittsburgh

Philanthropy has long been associated with images of industrial titans and wealthy families. In Pittsburgh, long a center for industry, the shadows of Carnegie, Mellon, Frick, and others loom especially large, while the stories of working-class citizens who uplifted their neighbors remain untold. For the first time, these two portraits of Pittsburgh philanthropy converge in a rich historic tapestry. The Gift of Belief reveals how Pittsburghers from every strata, creed, and circumstance organized their private resources for the public good. The industrialists and their foundations are here but stand alongside lesser known philanthropists equally involved in institution building, civic reform, and community empowerment.

Beginning with sectarian philanthropy in the nineteenth century, moving to scientific philanthropy in the early twentieth century and Pittsburgh Renaissance-era institution-building, and concluding with modern entrepreneurship, twelve authors trace how Pittsburgh aligned with, led, or lagged behind the national philanthropic story and explore how ideals of charity and philanthropy entwined to produce distinctive forms of engagement that has defined Pittsburgh’s civic life.


Praise For A Gift of Belief: Philanthropy and the Forging of Pittsburgh…

“Buechel . . . provides tantalizing explorations of the often-unheralded works of women, religious groups, and African Americans in early American philanthropy. . . . This compelling narrative is indeed a welcome contribution to the study of Pittsburgh’s history and a valuable aid to meeting the challenges ahead.” —Western Pennsylvania History Magazine

“The chapters of A Gift of Belief reveal both the successes of philanthropists and where they fell short. Many of the challenges that nettled 19th century philanthropists persist here today. A more expansive and nuanced view of the region’s philanthropy enables us to learn from and build on the past. Philanthropy, and its promise for Pittsburgh, remains a work in progress.” —Pittsburgh Quarterly

“Each of us wants to believe that good things will happen. The Gift of Belief reminds us that they do, sometimes by grand design but more typically by generous and often unremembered efforts among neighbors, donors, and caring citizens. The authors’ reflections amount to a story about how goodness happened in a place that rather unexpectedly (to the rest of the world) became a hub of modern American philanthropy.” —Gregg Behr, The Grable Foundation

“Offering many stories of philanthropic initiatives over the course of Pittsburgh’s history, this book provides a usable past that will serve both leaders and students of the city’s institutions.  Many of the stories are notable for their focus on the close relations between exceedingly wealthy donors and the professional urban planners, university leaders, researchers, teachers, doctors, and both Black and white religious leaders who did the institutions’ work.”  —David C. Hammack, Haydn Professor of History Emeritus, Case Western Reserve University

Kathleen W. Buechel teaches, speaks, and writes extensively about philanthropy. She brings nearly three decades of philanthropic, civic, and corporate sector leadership to her work. Currently she serves as executive director of the Benter Foundation, a Pittsburgh-based philanthropic organization that helps individuals and communities thrive. She is also senior lecturer in international affairs at the University of Pittsburgh where she directs the Philanthropy Forum at GSPIA and the Pittsburgh Philanthropy Project. In her consulting work, she helps donors heighten the impact of their giving and assists in engaging the next generation.