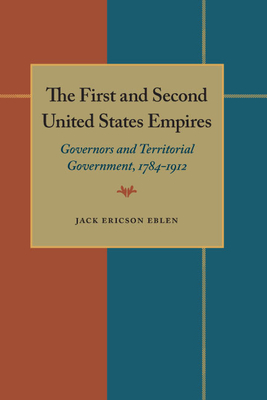 In the late eighteenth century the fledgling republic of the United States was faced with the problem of devising a form of government to oversee its vast land possessions north and west of the Ohio River. To fill this need, Thomas Jefferson drafted the Ordinance of 1784, which evolved into the Northwest Ordinance of 1787. Deliberately modeled on the British colonial system, it granted territorial governors broad autocratic powers. It defined government in the Northwest, and all other subsequent territories in the public domain.  Eblen defines two historical periods (empires): 1787-1848; and 1849-1912; based on government land acquisition. This book describes the nature of government in all the contiguous territories of the United States, offering an original and comprehensive view of the role and meaning of territorial government, and the administration of the Western territories.

Jack Ericson Eblen is a demographer and former professor of history at the University of Connecticut. He is the author of The Governor in the United States System of Territorial Government; and The Age and Sex Characteristics on the Northwestern Agricultural Frontier, 1840-1860.
Loading...
or support indie stores by buying on