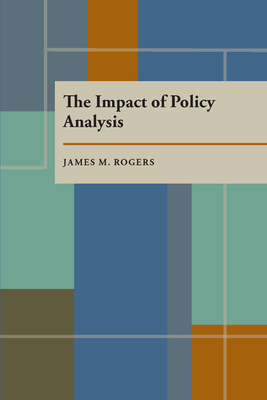 Government agencies spend billions of dollars each year for policy analysis with the expectation that improved policy will follow. Although civil servants conduct some analysis themselves, more frequently they contract with research organizations to assess the probable consequences of new social policies and to answer other policy questions.

Jams M. Rogers develops a theory that explains and predicts the impact of policy analysis. He illustrates his theory through welfare reform, where policy analysis is caught in political warfare and has little chance to improve actual policy.

During the 1960s and 1970s over $108 million was spent on four unprecedented social scientific experiments to test the effectiveness of a major proposal to reform the welfare system. Now out of favor, the negative income tax was thn considered to be an appealing alternative to welfare. Starting in New Jersey and Pennsylvania during the Johnson administration, the experimental research continued through Carter's term and helped to keep reform proposal and research organizations alive. This book examines the results of these experiments and their effect on Carter's reform attempt—the Program for Better Jobs and Income.

One of the author's main conclusions concerns the role of value conflict. If there is strong disagreement within society over the goals of policy, analysis will seldom change the minds of decision makers or influence policy. Policy analysis is more likely to influence thinking and policy if the issue involves low conflict.

“The substantive contribution of Impact is its specification of the important place of value conflict (or its absence) and the prior belief systems of decision participants on the way policy analysis is used. . . . For scholars studying the impact of policy analysis or the question of research usage more generally, Impact is well worth reading.”
—Journal of the American Planning Association

“James M. Rogers sets himself an interesting and important task: to develop a theory of the impact of policy analysis on government policy. . . . a worthy and ambitious effort.”
—Centre for the Study of Public Policy