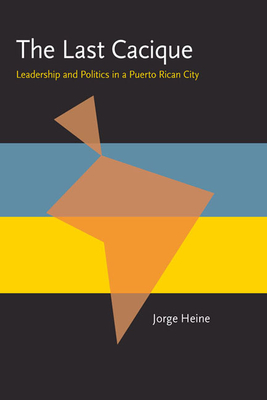 This pioneering study of the dynamics of city politics in one of Puerto Rico's largest townships examines the fascinating career to Benjamin Cole. A quasi-legendary figure in island politics, Cole served as mayor of Mayagüez from 1968 to 1992. His spectacular success often ran counter to the broader political trends in Puerto Rico and offers insights in the currents of change that swept the island from the 1960s through the 1990s.

Based on years of intensive research, including unusually candid interviews with members of Puerto Rico's political elite, The Last Cacique offers the first in-depth study of local politics in Puerto Rico and one of the very few available for the Caribbean region.

“This is an important book, simply because it is not what it claims to be, a study. It is a study of a 24-year mayoral tenure, but it is not a biography of that mayor nor a history of his city. Instead, Heine has written a very intelligent study of mayoral leadership behaviour in a Puerto Rican city.”
—Latin American Studies

“The study, based on four years of research and in-depth interviews with leading members of Mayaguez’s political elite, is a scholarly, sophisticated, well-written, and notable contribution to an understanding of the workings of mayoral leadership and politics in Mayaguez.”
—Choice

“An excellent book. Heine has a sense of human situations, of political battles, and the history of Puerto Rico. He has scholarly rigor, and his analytical arguments are laid out in clear language, with a stylistic elegance that will make the book appealing to specialists and nonspecialists alike.”
—Anne Pérotin-Dumon

Jorge Heine is professor of political science and CIGI Chair in Global Governance at Wilfred Laurier University. Dr Heine served as Chile's Ambassador to India, Bangladesh and Sri Lanka (2003-2007), was Ambassador of Chile to South Africa (1994-1999), and a cabinet minister in the Chilean government.
Loading...
or support indie stores by buying on