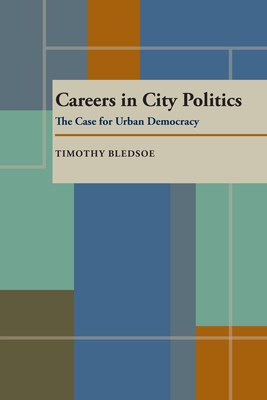 The Case for Urban Democracy

Careers in City Politics provides an in-depth view of the vital aspects of local politics-access to political office, individual office holder's accountability to the public, the performance of councils as collective political bodies, and the often high turnover of personnel.

Timothy Bledsoe bases his findings on the political careers of more than eight-hundred city council members representing cities with large and medium populations. Tracing how some officials' careers unfolded over five years, Bledsoe studies their reasons for seeking office and examines how successful they were in adapting to their jobs. He evaluates office-holders whose council careers were cut short and those whose lengthy service qualified them as “careerists,” paying special attention to first-term officials and to those who used their seats as stepping-stones to higher political offices. In this first-of-its-kind study, Bledsoe offers specific recommendations for restoring some of the lost vigor to local politics.

Praise For Careers in City Politics: The Case for Urban Democracy…

“Bledsoe presents a overview of modern city politics and argues that the careers of city politicians reveal useful insights into how local political arrangements affect democratic government. . . . The analysis is a stimulating one that sees political activism as important in the sustaining of a healthy democracy [and as] relevant to the wider discussion of urban change and the globalization process in urban political economy.”
—Political Studies

“Thoughtful and well-crafted. . . . Bledsoe skillfully mines his data set to determine which factors lead to careerism in politics. . . . One of the most appealing aspects of this book is Bledsoe's unvarnished sympathy for people trying to make their way in the political world. He recognizes the importance of political ambition, and he values the contribution that careerism makes to the functioning of the political system.”
—Annals of the American Academy of Political and Social Science

“An in-depth view of the vital aspects of local politics: access to political office, individual office holders' accountability to the public, the performance of councils as collective political bodies, and the often high turnover of personnel.”
—Research and Reference Book News

Timothy Bledsoe is professor of political science at Wayne State University.  In 2008 he was elected to Michigan State House of Representatives.
Loading...
or support indie stores by buying on