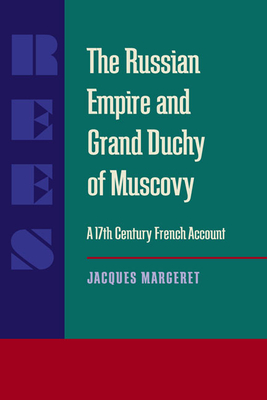 The Russian Empire and Grand Duchy of Muscovy

Jacques Margeret was a mercenary soldier who arrived in Russia in 1600 during the reign of Boris Godunov. For six years he served Boris and his successor Tsar Dmitri Ivanovich, first as co-commander of foreign troops and later as captain of the elite palace guard. Margeret offers a unique first-hand account of the political intrigues of this turbulent time and ponders the question of the pretender's true identity. Writing for the French public, to whom Muscovy was virtually unknown, Margeret also describes Russian geography, climate, flora and fauna, customs, the Russian Orthodox Church, the military, and daily life at court. Dunning has translated the edition first printed in France in 1607 and provided notes identifying obscure references and evaluating the accuracy of Margeret's observations in light of accumulated historical research.

Praise For The Russian Empire and Grand Duchy of Muscovy: A Seventeenth-Century French Account…

“When Captain Jacques Margeret returned to France in 1606 after some six years of service in Muscovy, he was commissioned by Henry IV to compile a description of that little-known land. The result, which was first printed in 1607 and immediately became popular, is one of the most valuable portraits that we have of Muscovy. . . . Chester Dunning presents this valuable text in a superb edition. The translation is both careful and highly readable.”
—Russian Review

Chester S. L. Dunning is professor of history at Texas A&M University.
Loading...
or support indie stores by buying on