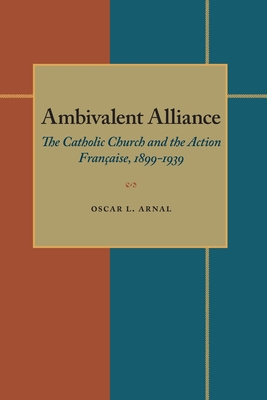 Ambivalent Alliance convincingly defends several provocative insights into a key period in the history of French Catholicism. It investigates the strange marriage of convenience, from 1899 to 1939, between the French church and the ultra-rightist, chauvinist, monarchist, and anti-Semitic organization called the Acton Française, and raises many disturbing questions. Why did an increasingly international church find a narrowly patriotic group so appealing? How could it endorse a movement founded by an agnostic whose philosophy sanctioned violence and the persecution of Jews and othe “undesirables”?

The twentieth-century French church was still feeling the shock waves of the French Revolution, assaulted from without and torn from within regarding its role in politics. Challenging the views of prominent historians of the period, Arnal shows that between 1899 and 1939 Catholic leaders pursued a consistent strategy of political and social conservatism. Whereas many regarded the church's flirtations with social democracy and its occasional attempts to rally French Catholics behind constitutional politics as proof of its progressive character, Arnal sees a fundamentally reactionary continuity in church leadership. Pius XI did not condemn the Acton Française for its fascist ideology; he feared independence among Catholics more than the radical right.

Arnal's wide-ranging study brings a controversial new interpretation to the political and ecclesiastical history of the twentieth-century.

Praise For Ambivalent Alliance: The Catholic Church and the Action Française, 1899-1939…

“Arnal traces the 'bizarre relationship' between the Church and the movement founded by the agnostic [Charles] Maurras back to its origins, and he has read a very wide range of Catholic sources. . . . His treatment of the underlying conservatism of Pius XI, obsessed by anti-communism, is unsparing and convincing. . . . Arnal has done a valuable service.”
—English Historical Review

“This book is fully research and documented.  More than that, it is a model of the clear and crisp prose of good historical writing.”
—Church History