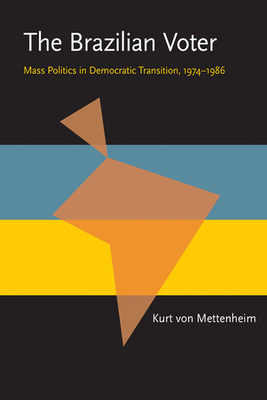 The dramatic transition from military to civilian rule in Brazil between 1974 and 1985 raises critical questions about voters, competitive party politics, and democracy at the end of the twentieth century.
This book argues that whereas military government stifled democratic activity, public opinion quickly revived when the military liberalized electoral politics in 1974. Voters rapidly aligned themselves with parties for and against military government, acquired new views on major issues, judged leaders by their performance and policies, and grounded their beliefs in concepts of social justice. Kurt von Mettenheim examines how Brazilian voters make choices and cast their ballots runs counter to long-held liberal theories about how democracy works.

“Kurt von Mettenheim's book contributes some valuable clarity. . . . It applies the literature on voting, party systems, and liberal democracy in the United States and Europe to Brazil. . . . An iconoclastic challenge to existing theory, the book clears the way for a better understanding of changing voter attitudes and choice both within and beyond Brazil.”
—American Political Science Review

“As a contribution to social science The Brazilian Voter’s significance lies in its use of public opinion data to demonstrate that while democracy is possible in diverse settings it is neither inevitable nor irreversible. . . He persuasively argues that advances in process tracing depend on analyzing the linkages between state and socirty, and on how individual Brazilians view them.”
—Studies in Comparative International Development

“Using an array of survey data and placing Brazil in the context of other recent democratic transitions, von Mettenheim argues that classic ideas such as 'mandate' and 'accountability' fail to describe adequately how representation works in mass democracies. . . . An excellent and provocative first book that makes consideration of the Brazilian political process essential to any informed debate about mass politics.”
—Foreign Affairs
or
Not Currently Available for Direct Purchase
Copyright © 2020 American Booksellers Association