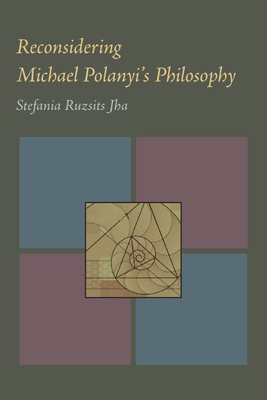 The chemist and philosopher Michael Polanyi (1891–1976) was one of the first twentieth-century scientists to propose a program to resolve the internal conflict of the modern Enlightenment: scientific detachment and moral nihilism with humanist values. Stefania Jha’s intellectual biography places Polanyi in the context of his time and culture, analyzes his key philosophical ideas, and explicates the application—and at times misappropriation—of his work.

Polanyi’s method was not laid out in his published works, and his vocabulary tends to make his writings difficult to understand. By exposing the structure of his theory of tacit knowing, and by tracing the growth of his thinking, Jha shows how the various elements of his thought are integrated. Through examination of his philosophical roots in Kant and the complexity of his evolving thought, she counteracts the popular notion that Polanyi’s philosophy stands apart from the western philosophic tradition.

Jha’s deep analysis makes Polanyi’s shift of focus from science to philosophy more intelligible, his philosophy more approachable, and the causes he championed—such as the freedom of science and cultural freedom—more understandable. Applying his notion of tacit knowing in practical directions, Jha seeks to bring the study of Polanyi’s philosophy out of the specialists’ enclave and into such fields as ethics and clinical medicine.

"Her criticism, her reconstruction, and her command of a wide range of sources will  make this a major contribution to the studies of Michael Polanyi."
—Richard Gelwick, University of New England

"Jha has written an important book that sheds new light on what she accurately characterizes as Polanyi’s integrative philosophy."
—Sam Schweber, Brandeis University

“ . . . is very much to be commended for its overriding purposes of systematization and enhancement of Polanyi’s work.”
—Isis

Stefania Ruzsits Jha is a research fellow at Boston University Center for Philosophy and History of Science.
Loading...
or support indie stores by buying on