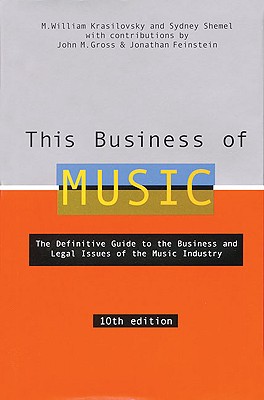 This Business of Music, 10th Edition

The bible of the music industry! Now in its tenth edition, This Business of Music has been revised and completely updated to reflect the latest changes in the ever-evolving music business. Every chapter has been revised. An entirely new chapter has been added, asking and answering the question “Are there borders in cyberspace?” The answer is yes, and the book clearly and concisely explains what they are and how to maintain them. Commentary on recent legislation, a reader-friendly summary of the laws on copyright duration, and much more insightful analysis—plus fully updated lists of music organizations and important websites—make This Business of Music indispensable for musicians, agents, managers, marketers, music publishers and groups, colleges and universities, and everyone who wants to make music and make money.

M. William Krasilovsky is an attorney specializing in music and copyright. He has been a trustee of the Copyright Society of America and has served as music counsel to Warner Music and special music counsel to the United Nations and UNICEF. As an adjunct professor at New York University and the State University of New York, Mr. Krasilovsky taught courses on the music business and on ethical issue important to the entertainment industry. He contributes frequently to entertainment and law journals and has lectured at universities and bar associations across the country. He lives in Stamford, CT.

Sidney Shemel died in 1994, and his work on the first six editions of this book is still very much in evidence throughout the current text. Mr. Shemel was Vice President of Music at MGM-UA and vice president and legal counsel to the United Artists Corporation’s record companies and its domestic and international music publishing subsidiaries.

John M. Gross, a graduate of Harvard Law School, practices entertainment and music law. Mr. Gross served as Vice President and General Counsel of the Entertainment Division of Commonwealth United Corp. and later became a partner in the law firm of Arrow, Edelstein & Gross, P.C. He lives and works in New York City.

Jonathan Feinstein, a New York and California attorney specializing in intellectual property strategy related to entertainment and technology ventures, was educated at Wesleyan University and Northwestern University Law School. He holds several patents and has developed commercially successful products. As an entrepreneur and executive in Silicon Valley and Seattle, he has worked with Apple Computer and Sophisticated Circuits, Inc., among others. He serves as an advisor and expert witness on media technology.
Loading...
or
Not Currently Available for Direct Purchase